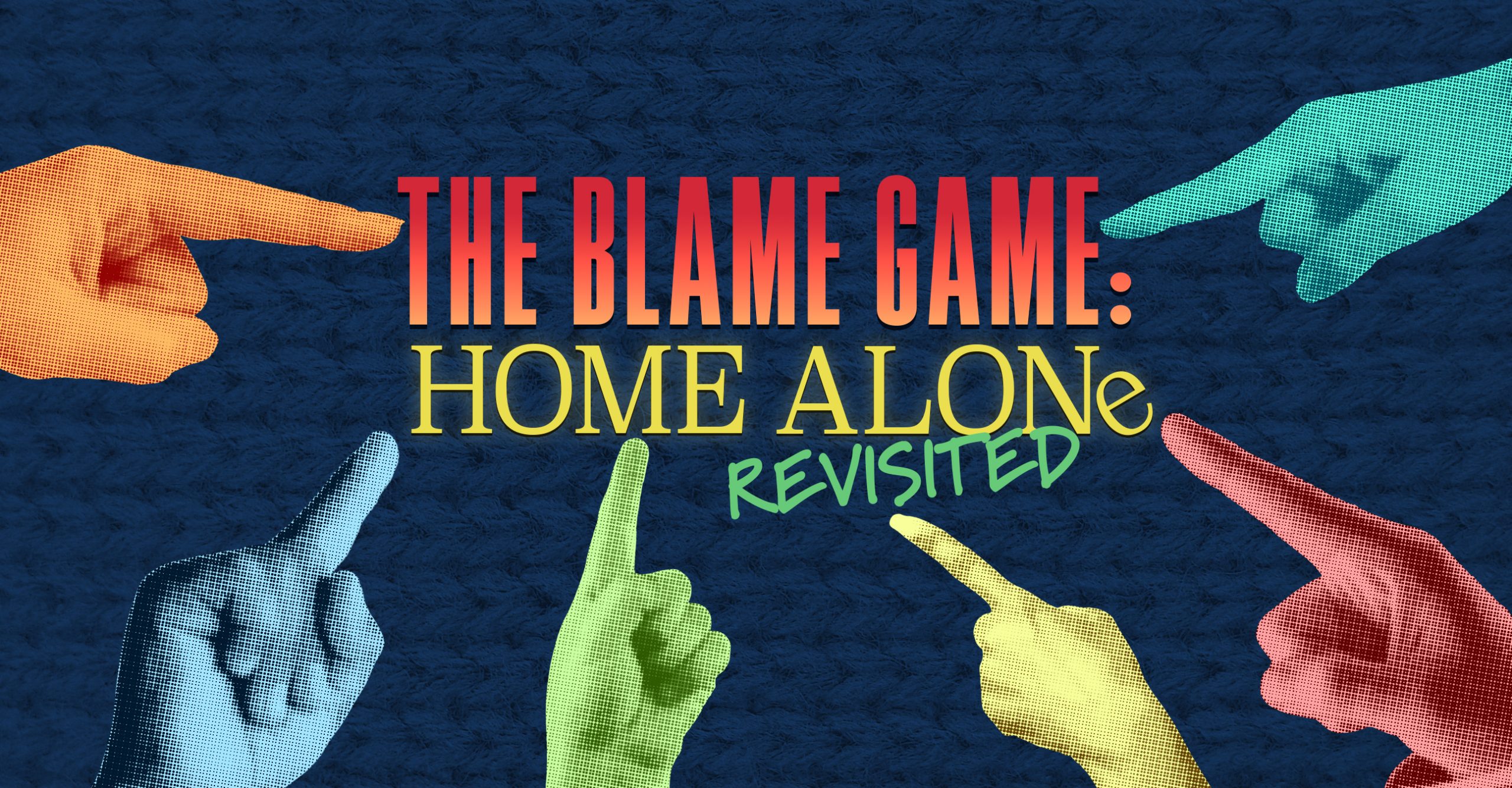 Three decades after Home Alone hit theaters, I rewatched the movie and its sequel expecting slapstick mayhem, childhood angst, and a lesson about the true meaning of Christmas. This time, I got all that—and another message: If you’re a mother, everything is your fault.

The movie was escapist fare for Nineties children longing simultaneously for independence and the safety net of a loving family—forgotten by his family when they leave for a trip, eight-year-old Kevin McCallister (Macaulay Culkin) indulges his every whim, then single-handedly dispatches two harebrained crooks. As an adult, however, I was struck by the unequal division of labor in the McCallister household: wracked with guilt, Kevin’s mother, Kate (Catherine O’Hara), moves mountains to return to him; his father fades into the background along with Kevin’s siblings, cousins, and aunt and uncle. On a storytelling level, the tight focus on Kate is effective, the relationship between mother and son serving as the emotional core of the story. But the movie also stresses that the burden for childcare falls squarely on the shoulders of mothers.

The night before the family trip to Paris, Kate sends Kevin to sleep in the attic with no dinner after he throws a tantrum, prompting him to wish the family would disappear. It’s an effective scene, one that instantly puts young viewers on Kevin’s side, and as a kid I was horrified—doesn’t Kate realize Kevin’s boorish older brother Buzz provoked the outburst when he gobbled up Kevin’s pizza and taunted him? And because of Kate’s choice to sequester Kevin on the third floor, he’s lost in the shuffle the next day. 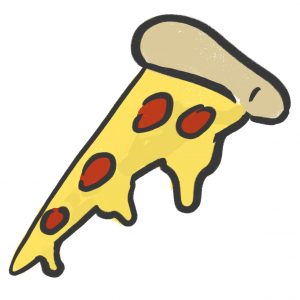 As an adult, I still think that Kate overreacts, but I feel more sympathy for her. After all, it’s the eve before an international vacation involving four adults and 11 children. In both media and real life, fathers are often viewed as the disciplinarian while mothers are seen as comforters. In Home Alone, however, Kate takes on both roles—and even multitasks. While husband Peter (the late John Heard) echoes Kate’s orders (“Kevin, upstairs!”), Kate physically escorts the boy out of the kitchen, pausing to pay the pizza boy and talk to a visiting policeman (actually one of the criminals casing the joint, played by Joe Pesci). So I’m willing to cut her some slack.

Screenwriter John Hughes and director Chris Columbus weren’t so generous. On the plane, Kate and Peter realize they’ve left Kevin home. Actually, Kate realizes. She’s convinced something is amiss, but Peter reassures her they took care of everything. When she remembers Kevin, she’s gutted: “What kind of mother am I?” Peter is more willing to shrug it off: “We didn’t forget him; we just miscounted.” The message is clear: Kate, not Peter, has sinned, and she will spend the rest of the film atoning.

After the family lands in Paris, Kate takes charge, phoning the cops back home and asking her kids and sister-in-law to call neighbors to check on Kevin. The McCallisters learn that no flights to Chicago are available until Friday morning, so it’s up to Kate to camp out at the airport on the chance a seat will open up.

Though the film is hard on Kate, it’s also worth considering the privileges she and her family possess due to their wealth. Peter and the rest of the family stay at his brother Rob’s luxurious Parisian apartment, and Kate barters everything she has to get a couple to give up their seats on a flight to Dallas: $500 in cash, a pocket translator, an upgrade to first class, her earrings, and a (fake) Rolex. Like most things, making up for leaving your kid home alone is a lot easier when you’re part of the one percent. And though Kate goes through emotional hell in her efforts to return home, no one ever raises the possibility of jail or criminal prosecution for child abandonment. Black mothers are judged unfit at far higher rates than white women, something that’s never an issue here for Kate.

After Kate begs the woman “from a mother to a mother,” the couple relents and gives up their tickets. But 60 hours later, an exhausted Kate still has miles to go—about 700. She’s made it to Scranton, PA, where no flights to Chicago are available. Rage mounting, in a tone that would get her labeled a “Karen” if the film were released today, Kate informs an airline agent, “If it costs me everything I own, if I have to sell my soul to the devil himself, I am going to get home to my son.” 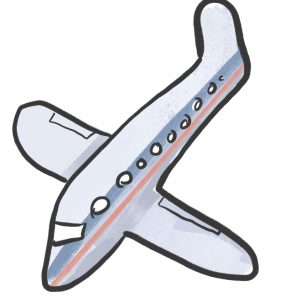 Luckily, nothing so Mephistophelean is called for, just a willingness to spend 18 hours in a van full of polka players. Kate accepts a ride from musician and fellow traveler Gus Polinski (a pitch-perfect John Candy). Still, Kate is full of self-recrimination. “I’m a bad parent. I’m a bad parent,” she insists.

When Kate finally arrives home, Kevin stares at her, hurt and a little wary, before she tells him she’s sorry and he runs to her, all finally forgiven. Peter and the other kids, who took the Friday flight that Kate wouldn’t wait for, walk in moments later, and though Peter is elated to see his son, he offers no apologies; Kate (and Kate alone) has already mended the rift between Kevin and the rest of the family and put things right.

After the credits rolled, I was disappointed but had hopes about revisiting the sequel—surely Home Alone 2: Lost in New York would focus on the failures of a father rather than the mother? Unfortunately, the film, hewing fairly faithfully to the formula of the first one, misses the opportunity to let the McCallister patriarch do some soul-searching. This time, the family rushes to make a plane to Miami. At the airport, Kevin grabs his dad’s carry-on to look for batteries for a toy. Peter notices but leaves the boy lagging behind in his haste. At the gate, a worried Kate wants to make sure the whole family makes it on the plane, but boarding agents tell her they’ll do so. Meanwhile, Kevin mistakenly boards a plane bound for the Big Apple. 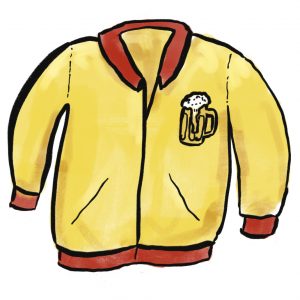 This time, it’s clear which parent screwed up. But when Kevin is discovered missing, Peter never questions his fitness as a father; there are no tears, no offers to make a deal with the devil. And when the McCallisters go to New York, it’s Kate who takes to the streets in search of Kevin. When she finds him, in an implausibly deserted Rockefeller Center, she and Kevin embrace and both apologize. It’s a touching scene, but couldn’t it have taken place between Kevin and his father, whose actions led more directly to Kevin going missing?

Both films are a reminder that mothers are still expected to fulfill “emotional labor,” the often-unacknowledged work that encompasses everything from remembering birthdays to scheduling doctor appointments to soothing hurt feelings. Fathers don’t love their children any less, and over the last three decades, commercials, films, and TV series have made great strides when it comes to portraying fathers and mothers as sharing equally in the division of household labor—even Walter White, Breaking Bad’s drug kingpin, was willing to change diapers. However, these symbolic gestures haven’t corrected societal imbalances. It’s still mothers who assume the heaviest load, especially now. With remote learning due to the COVID-19 pandemic, many mothers are pushed to the limits as they supervise children while also attempting to work.

The movies are still my favorite part of the holiday season, and they’ll never leave my rotation. But now that I’m closer in age to Kate McCallister than to Kevin (a thought that has me smacking my palms to my face and screaming Macaulay Culkin–style), I can see the films with fresh eyes. I wouldn’t change a thing about them, but maybe a more nuanced viewing will leave us with some food for thought. Why do we still expect women to do it all? And will men step up to the plate? 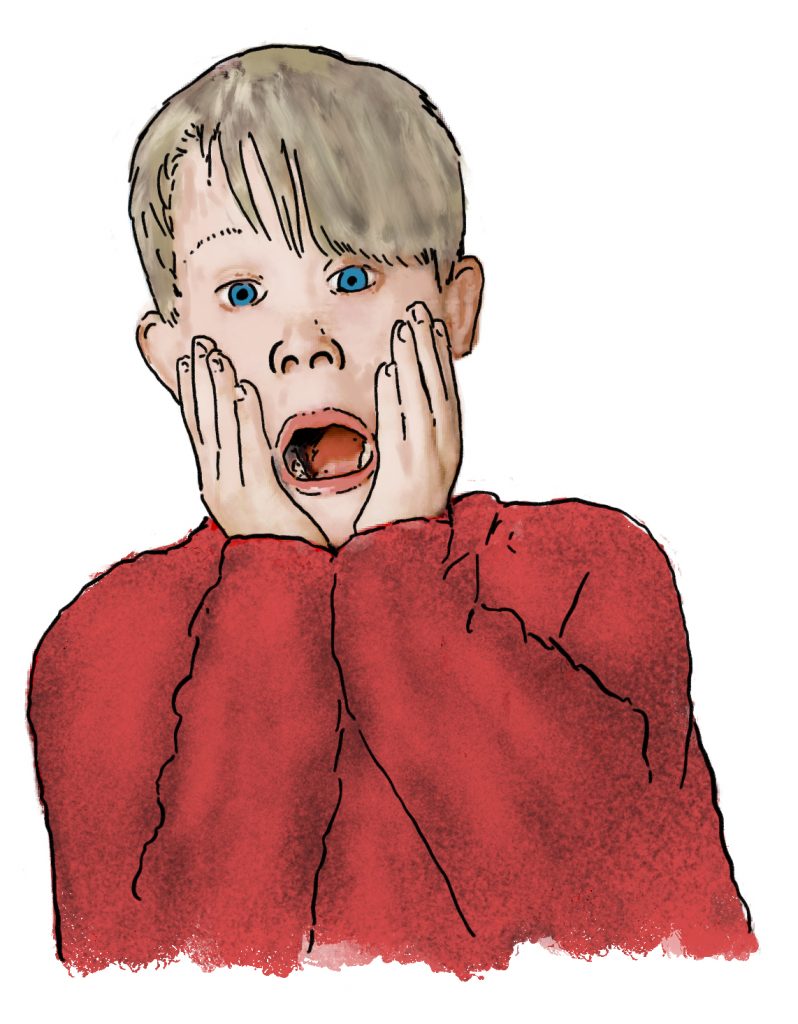 This essay originally appeared in the Winter 2021 print edition of Retrofied Magazine with custom illustrations by Mark Dowd. Print and digital editions of the magazine are available for purchase here.

Mahnaz Dar is an editor at Library Journal and School Library Journal. You can find her on social media @DibblyFresh, where she shares adorable animal videos and tweets about children’s literature, The Sopranos, and her favorite Nineties TV shows.