Skating Into the Past 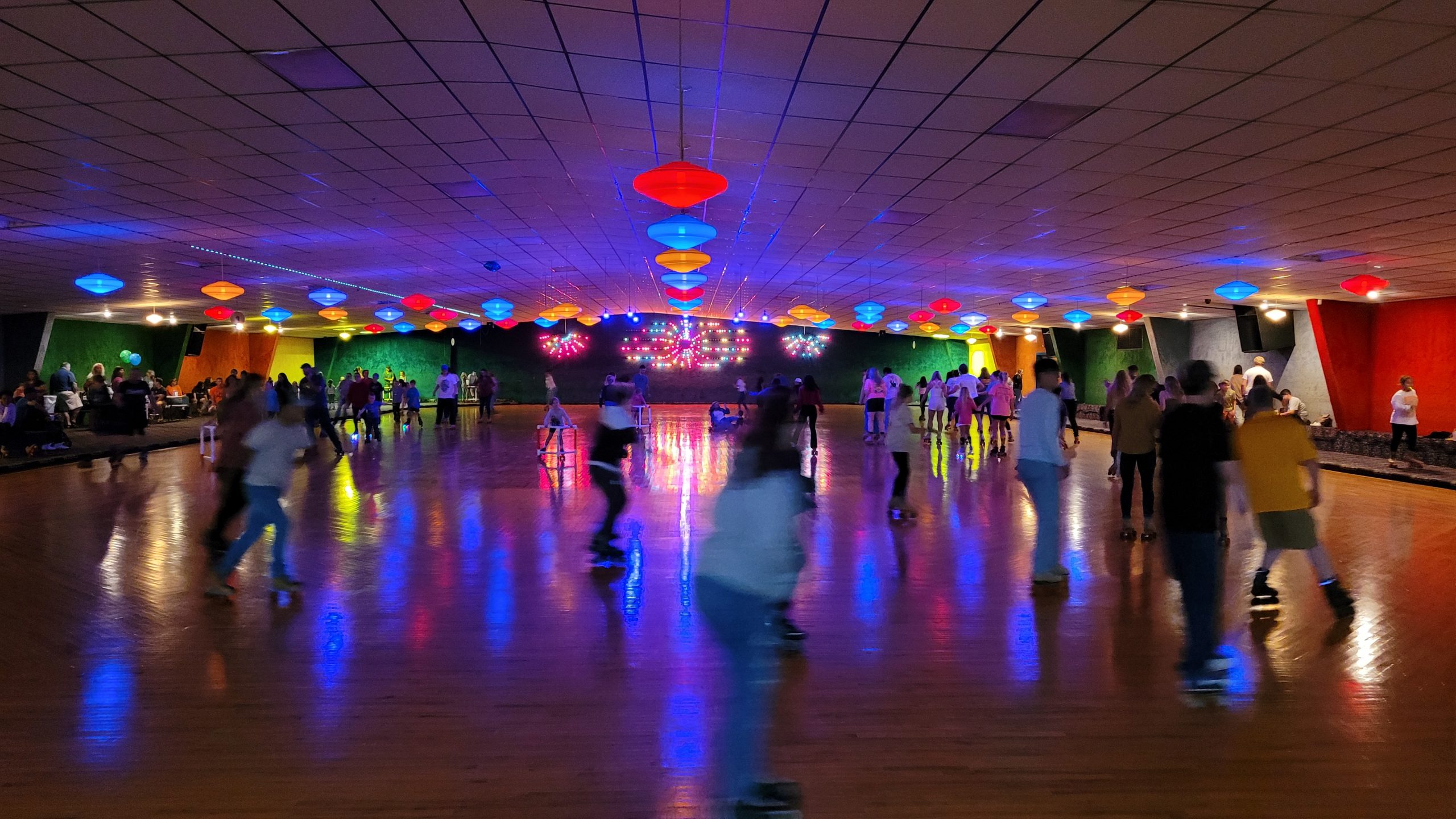 Waiting patiently in line to pay the entrance fee to my local skating rink fills me with almost the same anticipation as it did when I was 12. As I near the ticket window, hearing the music and laughter just beyond the door—all bathed in the smell of stale deodorizer and burned pizza—I try to remember the last time I was here. Was it for one of my kids’ birthday parties or was it just a fun distraction on a normal weekend? Whenever it was, it has been too long and I regret not coming sooner, because like Joni Mitchell sang, “You don’t know what you’ve got ’til it’s gone.”

Skate Country in Gainesville, GA has been open as long as I’ve been alive—41 years. While it wasn’t my childhood skating rink, it was my own kids’ and countless families’ first and favorite rink over the past four decades. Despite its long history entertaining patrons, today would be its last.

Surprisingly, unlike so many other businesses, the COVID-19 pandemic wasn’t the death knell for such a storied pillar of the community. Instead, a wealthy local businessman purchased the land, the building, and its contents without it ever hitting the market—supposedly to house his classic car collection. And who can really fault the aging owners for accepting what must have been an attractive offer? Still, the loss stings. 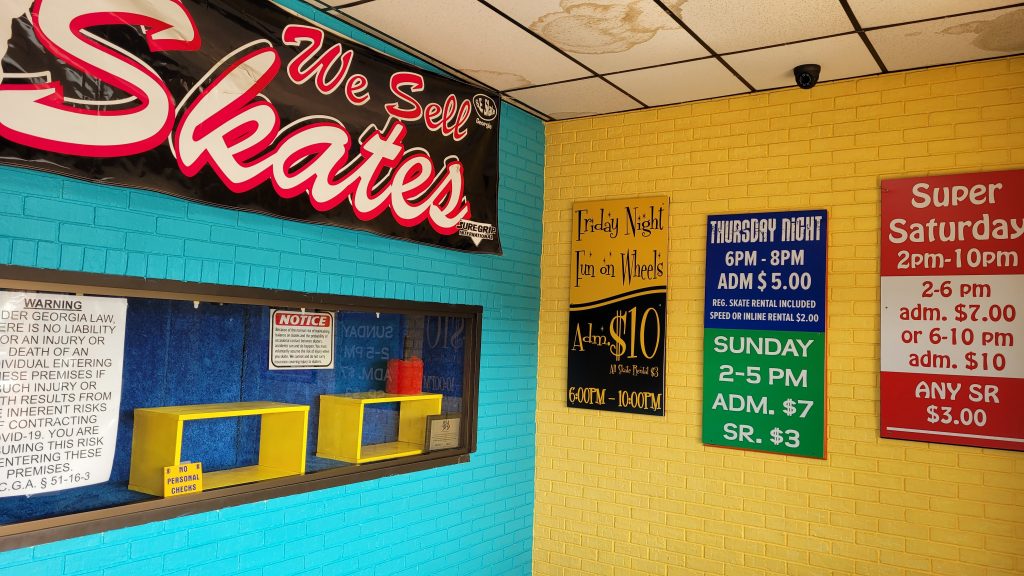 An empty glass case welcoming patrons to the final day of business for Skate Country in Gainesville, GA

Before I can dwell on the fate of Skate Country my oldest child and I are past the heavy metal door and headed to the skate rental window. “Size 11, please.” I say to the bright-faced teenage attendant who probably doesn’t realize this may be one of the best jobs he’ll ever have in his life. The light brown leather, well-worn by untold masses of skaters before me, feels just a little snug which helps me feel just a bit steadier when I stand up to glide toward the rink and into the past on top of the familiar orange wheels. 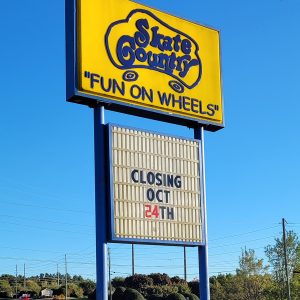 A sad, but necessary announcement.

Growing up with few options for entertainment in Clinton, Mississippi, my own local skating rink—Funtime Skateland—was the Friday night hot spot during my middle school years. Even though roller skating’s popularity was probably at its zenith during the disco era of the late 1970s, the atmosphere of the roller rink in the early ’90s was electric.

The sense of freedom after being dropped off by your parents to hang out with your friends, play video games, and eat junk food for hours at a time was liberating, particularly after a long week of school. While half the school seemed to turn up each weekend, there were certainly standouts. There were the speed skaters, the backward skaters, and the rare, agile few who could show off with a graceful pirouette.

It could be argued, however, that in the hierarchy of kids at the skating rink, there were none cooler than the lucky few who could grab a hand and lead a partner out on the rink when the red light on the board at the far end of the facility lit up with the divisive words: “Couples Skate.” While Rihanna may have found love in a hopeless place, I found love in Funtime Skateland skating to “Love of a Lifetime” by FireHouse.

The music at a roller rink is a big part of the appeal. Most of the other kids would rush the wooden plank floor when Vanilla Ice’s “Ice, Ice, Baby” pulsed through the speakers, but my heart would skip a beat when Bryan Adams’s “(Everything I Do) I Do It For You” serenaded my sixth grade girlfriend, Lauren, and I as we practically floated in synchronized rhythm holding hands for all to see.

Back in present at the ill-fated Skate Country, I awkwardly trudged my wheeled way through the stained carpeting, past the Ms. Pac-Man arcade machine that has been played so often that all artwork has been worn off and only the metal under the control panel remains, to reach the floor for what I just realized might very well be my last skate. 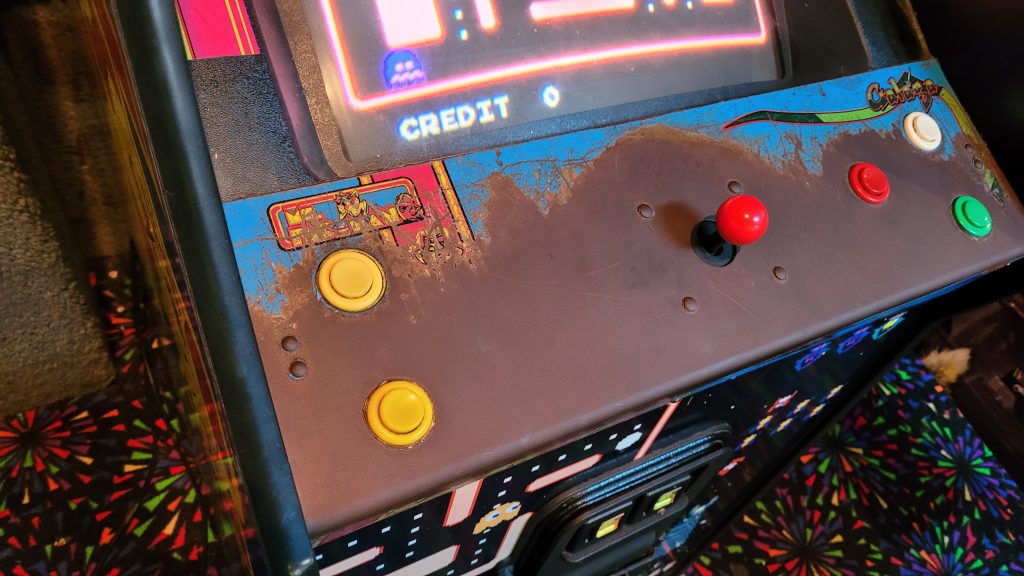 How many games of Ms. Pac-Man were played on this? All of them?

In an ideal farewell situation, they would be playing all-time classic songs, but the music blaring over the high quality sound system was current radio play fare. In fact, I’m fairly certain that no songs played that Sunday afternoon were older than the yellow, blue, orange, and brown carpeting that lined the walls. That’s OK, however. I realize my generation’s time had passed a long while ago and this rink skated with the times to cater to new families, making new memories.

While the music was new, not everything was quite as current. The concession stand looks unchanged. You could still find candy, pickles, soda, and horrible pizza for prices much more affordable than a movie theater’s concessions. Kids still made their way to the center of the rink to play the “Hokey Pokey.” Plastic tchotchkes like fake fingers, spider rings, and parachute men were still available for pennies or tickets at the prize counter. And while LED lights now accent the ceiling, seemingly ancient colored bulbs arranged in retro futuristic patterns on the back wall transport you to another time. 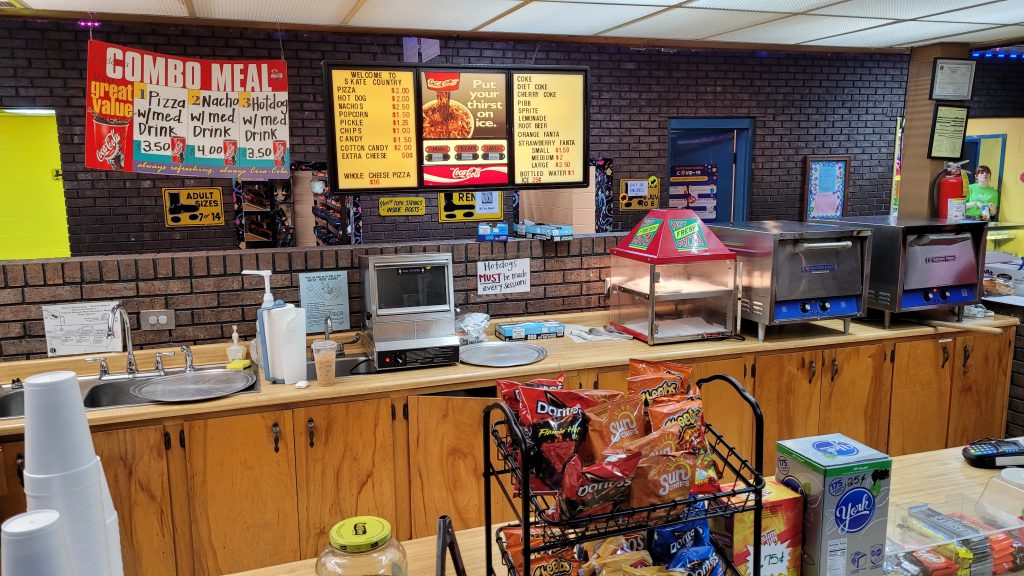 Much like riding a bike, knowing how to roller skate never really leaves you. Navigating my way around the rink I build my confidence, pick up speed, and weave in and out of other, less-fluid skaters. As my feet cross over one after the other making the turns at each end and increasing my velocity I imagine what it would feel like to stun everyone with amazing gymnastic abilities or even a choreographed roller skating routine, spinning around to stop and take in everyone’s awestruck faces. Instead, I make my umpteenth revolution and accept my skill level as somewhere above the tiny tikes balancing only with the help of wheeled skate mates and the four or five speed skaters rhythmically rocking in lined unison to the beat of the song.

I’m a nostalgic person by nature, but I surprised even myself by how wistful I was that last day at Skate Country. With an endurance far less than my kids, I had time to rest and realize that my sadness wasn’t for the death of roller skating in general. No, in fact, some would say there’s actually a roller skating renaissance right now. I realized that while my own youth was gone years ago, now I was saying goodbye to my kids’ youth and the place that housed so many memories for me and my family.

Even in the final few days, tables in the back were still occupied by birthday celebrations. My own children celebrated their birthdays here over the years. Their schools regularly held fundraisers here. Those experiences will now be rooted in the past—for me and similar ones for everyone who walked through Skate Country’s doors.

If there was one final mercy extended to customers it was that we were told when Skate Country would be closing. What person wouldn’t want to spend just a few more minutes with a dying loved one?

Knowing this day would be my last time to enjoy the place, I made certain to take it all in and savor what I could during my visit. Unlike Funtime, there wasn’t a dedicated “Couples Skate” at Skate Country, but that didn’t stop me from holding hands. This time, however, it was with my now-sixteen-year old child. I thought back to when I was teaching her how to skate on this very rink years ago, and how fluid and skilled a skater she is now. How far she’s grown and matured. How she’s learned to stand on her own.

I squeeze her hand one last time and tell her “One more song, then we need to go.”

As I let go and skated ahead, I made a mental note to catalog this memory, savoring the moment. My feet were moving, but it wasn’t through any effort on my own. I was soaring on nostalgia. I could have skated longer. The rink wasn’t closing for a few hours, but sometimes you know it’s time to leave even when you aren’t ready.

I slowed my momentum and skated toward the ledge, stepped back onto the carpet, regained my footing, and walked away. 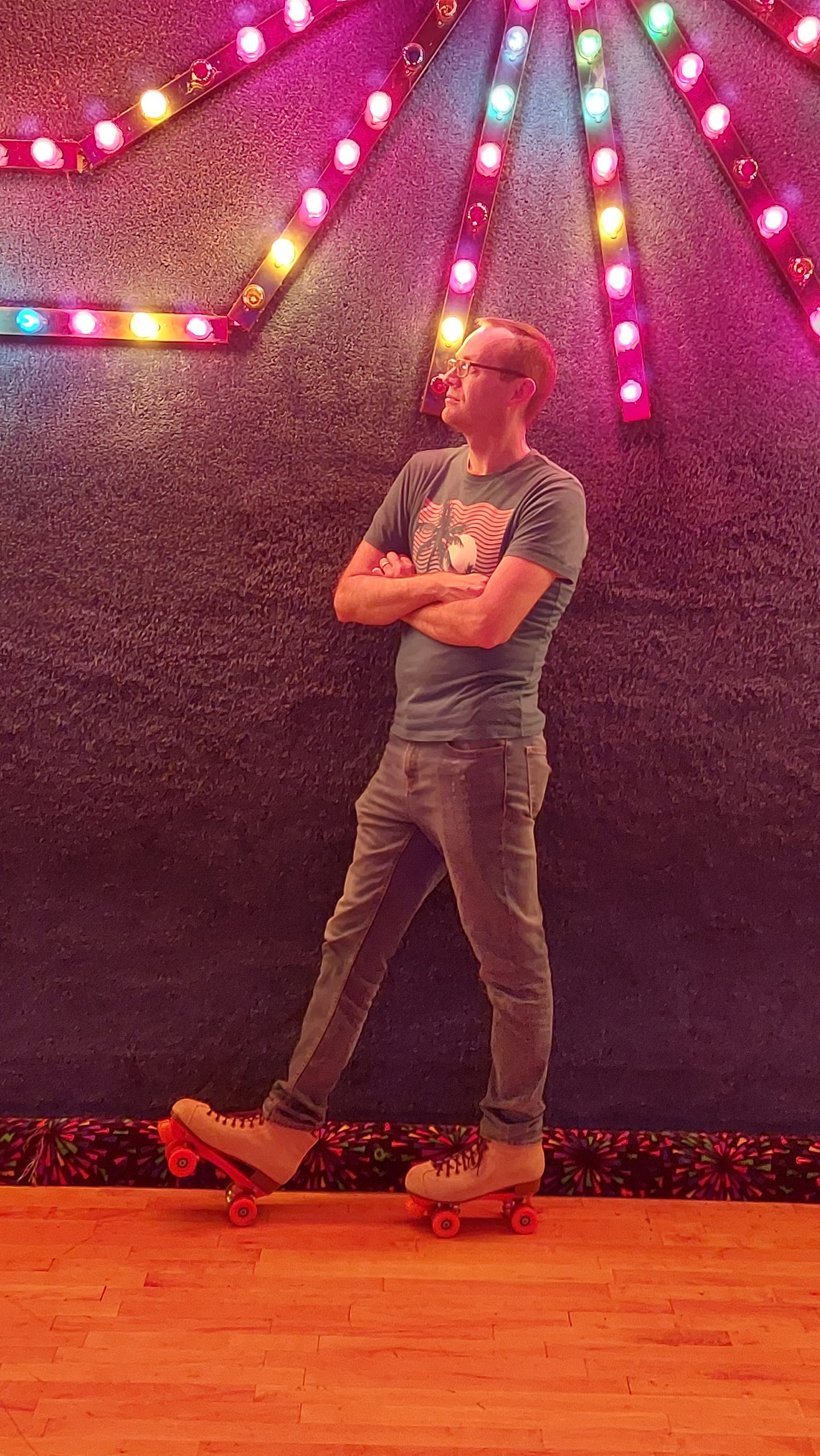