‘Robo Force,’ the Retro Toy Line No One Remembers, Is Back The early ’80s were a wild time. Looking back nearly 40 years, it’s easy to forget that, before Hasbro created Transformers and G.I. Joe, there were other toy lines that were trying to catch our attention.

Toy lines such as Robo Force from Ideal. Backed by a surprisingly high quality animated movie (there are robots, lasers, parental abductions, sneering senators, police shakedowns, and a zealot from 2,000 years past with a crystal brain all in the first six minutes) Robo Force was, sadly, edged out by that other robot-themed property from Hasbro that also debuted in 1984.

It’s not hard to see why. While Transformers featured anthropomorphic robots that could convert into vehicles, Robo Force looked like, well, this.

Robots very much not in disguise (Photo credit: TheOldRobots.com)

Sporting a retro vibe that was in line with the ’70s rather than the ’80s, Robo Force was more reminiscent of Star Wars droids than anything else. But they had features galore! You could…push a button and make their bendy arms “grab” things! You could store additional weapons in their chests! You could…stick them to things with the suction cup on the bottom? Some of them had a hook on their heads so that you could hang them from a piece of string?

Yeah, as far as ’80s toys went, no one wanted to play with Robo Force. The suction cups only kind of worked, the thin plastic of the arms would crack easily, and the alternate weapon hands met the fate of most loose toy accessories (though I really do appreciate the built-in storage). As with so many others, the line couldn’t face the Hasbro onslaught and died a quick death.

Still, as with every quirky ’80s property, Robo Force has its fans. The property rights were bought in 2013 by indie toy company, Toyfinity. They reimagined Maxx and the gang, managing to capture the aesthetic of the original toys while injecting a bit of a fun, anime vibe.

The line didn’t catch on, however, and Toyfinity sold the property last year to The Nacelle Company. You don’t know them for toys but you do know them for their extremely fun Netflix documentary shows The Toys That Made Us, The Movies That Made Us, A Toy Store Near You, as well as the Disney+ series Behind The Attraction.

Robo Force will be the first property in their new Very Important Toy Line. The figures will be in the 7.5-inch scale (so a bit larger than those G.I. Joe Classified figures you’ve been coveting) and will sport full articulation. And, yes, even though they have legs, they’ll still have suction cups on their feet. 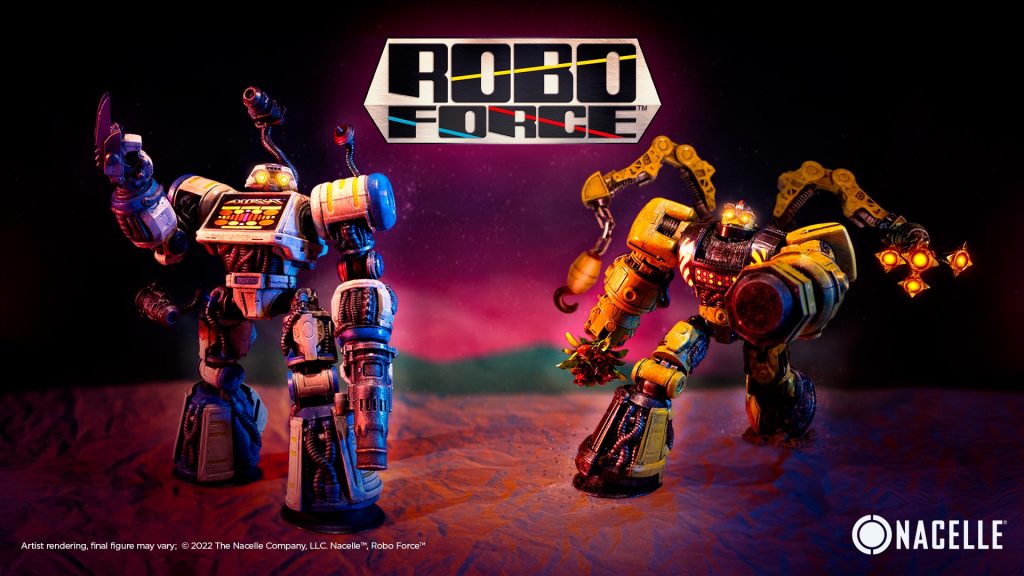 As you can see, the redesign is much more aggressive. The new designs are more in line with gritty ’90s comics than the Star Wars-ey originals (the prominent cable details in particular remind me very much of Ghost Rider: 2099). Still, they are distinctive without being completely unrecognizable as Robo Force characters. The big, blocky chest deco, the cone-like feet, even the head shapes, all call back to the original toys without being slavish.

Nacelle is promising a new storyline as well: Maxx Steele and Wrecker both get demoted to mundane duties when an untrustworthy line of upgraded bots take their jobs (anyone else getting a Robocop 2 vibe?). It’ll be fun to see how much of the original story gets woven in and how they’ll update the villain Hun-Dred and heroic professor SOTA when they debut later this year.

I’m just hoping the villains’ leader has a crystal brain.

The first wave of Robo Force figures (Maxx and Wrecker) will be available to pre-order for $49.99 each starting April 22, 2022 on NacelleStore.com.

Anthony Karcz is a pop culture, sci-fi, and fantasy junkie with an affinity for 80s cartoons. When he isn’t dispensing (mostly sound) technological advice on the Forbes.com Innovation page, you can find Anthony on Roarbots. His first novel, Nightingale, can be found on Amazon.