Purple Roundy: He Was a Mustachioed, Mulleted Purple Gladiator 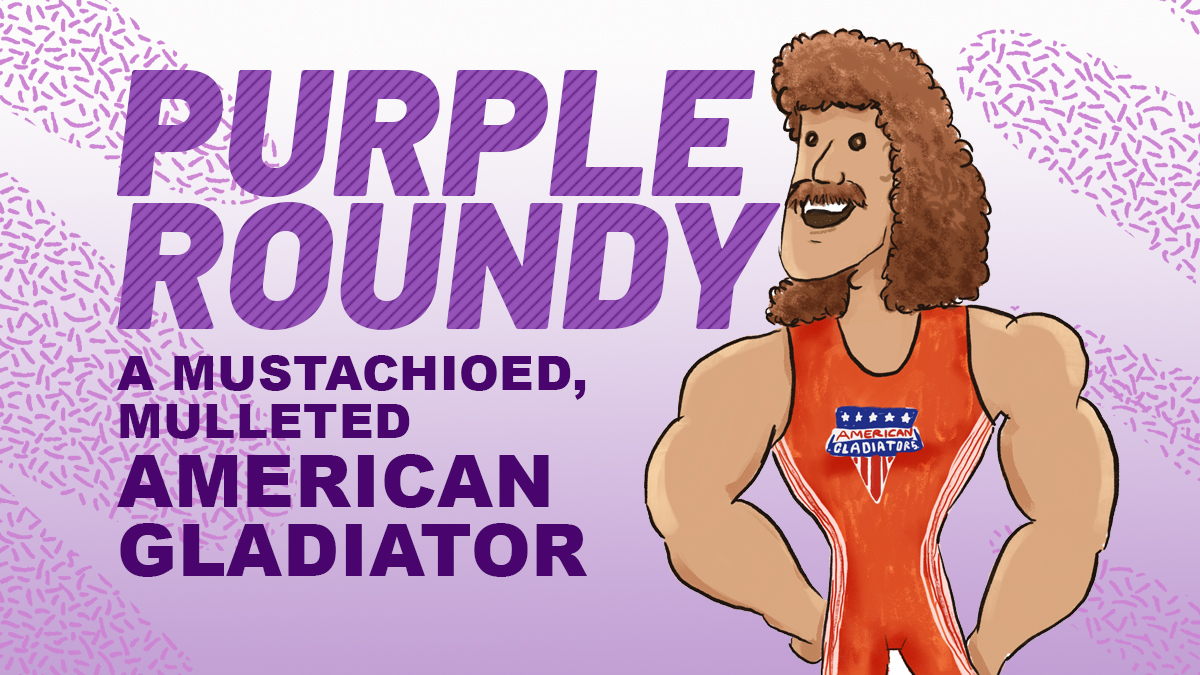 Editor’s note: This work of fiction was originally published in issue #1 of Retrofied, which you can view in its entirety for free. Original illustrations by Mark Dowd.

Growing up in the ‘90s in a trailer in rural Alabama, there were four television stations, which meant that entertainment options were limited, and throwaway shows relegated to syndication became must watch events. One particular Friday evening in 1991, I saw a man flash across the screen of the 19” color television screen that would cause five-year-old me to drop what I was doing, hypnotized by the hurricane of Machismo. The perfect post ‘80s permed mullet, the mustache, the piercing blue eyes that complimented a chiseled physique. Surely the specimen on the family TV set was everything that was man in 1991.

It wasn’t Tom Selleck cavorting around Hawaii in a loud floral shirt, nor was it David Hasselhoff running down a California beach in slow motion. No, this was Phoenix, Arizona’s finest specimen of fitness and masculinity—a man known as Purple Roundy. He stood there in a red jumpsuit next to Mike Adamle and Larry Czonka, prepared to test his mettle against the modern-day gladiators on America’s favorite show about modern day gladiators; a show known simply as American Gladiators.

The next hour of television all but proved that Purple Roundy was not only a tenacious competitor, but also the pride of Phoenix, and 30 years later, one of the most popular competitors in American Gladiators history.

Indeed, over the years since his appearance on the show first aired in syndication, legions of fans across the country have seen his episodes on Spike TV or ESPN Classic reruns and became just as transfixed as I was way back in 1991. But surprisingly, even in the age of infinitely google-able people and information, the man known as Purple remains an enigma. So, to remedy this miscarriage of nostalgic justice, I set out on a quest to find Purple Roundy and finally get some answers to the myriad questions surrounding the ultimate underdog of ‘90s television.

As I sat on the plane to Phoenix, I had exactly two leads on where to find Purple, both coming from purpleroundy.com, a website dedicated to finding the man himself. One was the gym he frequented in the Valley of the Sun, and another involving a towing service owned by a family with the same surname.

I got off the plane in Phoenix and headed to the rental car counter and was handed the keys to a Chevrolet Colorado, a vehicle I chose as the most capable of withstanding the harsh summer heat and terrain of Arizona. I pointed the navigation arrow of the included GPS to the Pure Fitness gym that was reported to be a haunt of the man himself. I had been on the interstate for all of ten minutes before the radiator in the Colorado overheated, forcing me onto the shoulder of the Arizona highway, and into a date with destiny.

A quick call to the rental car company had a tow truck en route, and to my shock, a neon purple tow truck passed slowly by and eased onto the shoulder of the highway. Yellow airbrushed cursive letters on the door of the tow truck read: Roundy Towing.

A man in his 20s stepped out of the truck and caused me to do a double take. The chiseled physique. The mustache. The crystal-clear blue eyes. For a second I believed I might’ve slipped into a time warp and was back in 1991. This young man had to be the progeny of the Purple One, the resemblance was uncanny, save for the hair, which was shaved high and tight.

“Do you know Purple Roundy?” I asked as the man began hooking tow straps to the overheated Colorado. He stopped and stood up to face me, the afternoon Arizona sun framing him in a savage golden glow.

“Purple is my daddy.” He spoke.

“I have to meet him.” I stammered.

“Well, I’d say you hit the jackpot,” He said. “He’s at the yard where this truck is headed.” 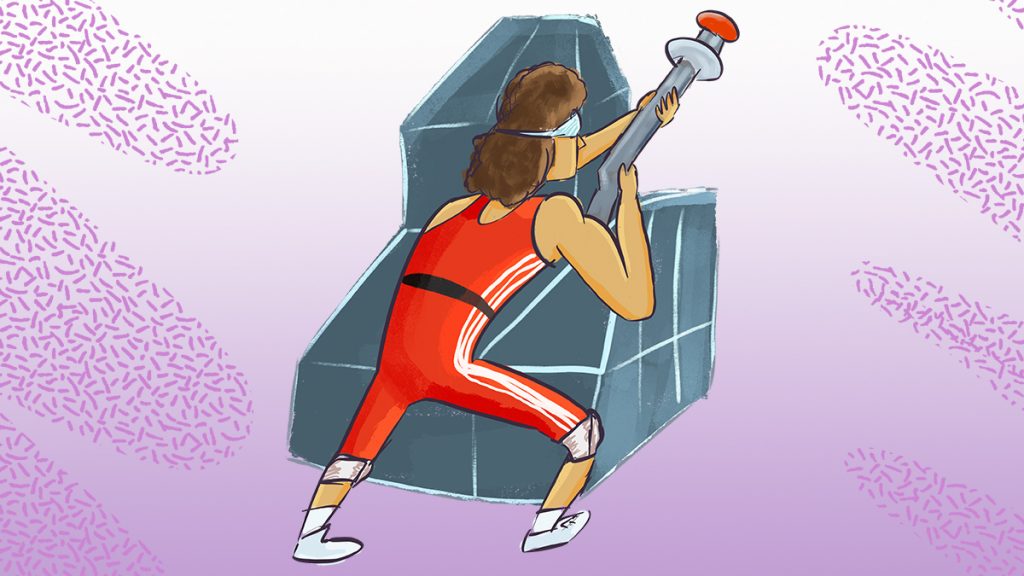 I couldn’t say a word as the tow truck navigated the streets out of town and to a fenced-in lot of broken-down, sun-scorched vehicles on the Roundy Towing yard. I stepped out of the truck and there—standing in the door of an old single wide trailer not unlike the one I lived in when I first saw him 29 years before—was Purple Roundy.

The permed mullet was more gray than anything else, and there were some lines framing those blue eyes, but it was unmistakably the very man that I had come to find. He crossed the dusty yard and extended a fist in my direction.

“You’re never gonna believe this,” I said as I bumped my fist to his, “But I’ve come all the way from Georgia to find you.” His eyes narrowed and he withdrew his fist.

“You don’t look nothin’ like me. I don’t care what your mama told you, I’ve never even been to Georgia!”

“N…no sir,” I stammer back. “That’s not my intention at all. I’m here because you were on American Gladiators.”

At this mention, his gaze softens, and he smiles.

He slaps me on the shoulder and gestures toward two dusty camping chairs in front of the trailer.

Over the next two hours, he reminisces about the tryout process, the gladiators, the money, and life in a post-fifteen minutes of fame world.

On how he found out about the tryouts:

“They put a flyer in the gym I worked at.”

“They make you do 25 pull-ups in 30 seconds, run the 40-yard dash in less than 5 seconds, climb a 40-foot rope, and do a ladder drill like in football. After the pull ups, there was maybe 20 guys left, and after the rope climb it was me and three other guys. We all made the cut.”

“The guys were cool as hell, and the girls were hot as hell. When I was climbing the wall on the first show I did, Turbo was hanging on to my leg and I dragged him up that wall. I was hurt, and was ready to quit, but then we were backstage and Turbo came over and did some kind of chiropractor magic on my back and boom! I felt ready to go again. Matter of fact, if ol’ Turbo is still out there cracking backs, he can stop by any time.”

On the prize money:

“I got a couple grand out of the shows I did. I spent it on buying a car to run in demolition derbies. I was real big into that back then. I got a couple trophies with the car I bought. Maybe better than any prize money was I got to hook up with a lady competitor. I won’t give any clues as to who, but I will say she had a name like a bird.”

“Nobody knew until the show was on TV, and then I had people at the gym wanting pictures and stuff. After a couple months it was over and it was back to towing wrecks and cashing checks.”

On his internet notoriety:

“I don’t go on the internet much. If people wanna know how I’m doing, tell them I’m doing just fine.”

On what he would say to his fans:

When I asked what he was up to these days, he stood and led me into the back room of the trailer. The walls of the room were lined with tin foil and fluorescent blue lights illuminated massive green plants with an unmistakable leaf. He breaks off a bud from one of the plants and we go back outside into the sunlight.

“You know they just passed that law in Arizona,” He says, holding the bud up in the sunlight. “This stuff is legal here now, and I’ve got a killer strain that I’m calling ‘Purple Roundy.’”

The bud is thick and dark green at the base with a dark purple hue at the ends. It is perhaps the most appropriately named strain of marijuana I have ever seen.

Purple’s son comes over and tells me that my rental ride is ready, snapping me out of my purple haze.   The elder Roundy disappears into the trailer and returns with a pair of vintage sports goggles in his hand. “They let me keep these after the competition was over. You can have them.” He says extending the goggles towards me. I consider putting them on but decide instead to tuck them safely into my pocket. “Thanks Purple!” I exclaim. “My name is Mark,” He says with a wink. With that, I bid farewell to one of the greatest competitors in American Gladiators history.

I don’t bother putting an address in the GPS. I just drove the truck out into the desert. I didn’t know what I expected from my trip to find a syndicated television legend. I definitely didn’t expect it to happen so quickly, my return flight wasn’t for another three days. Perhaps I thought I’d find a man who steered the Atlasphere ball of ‘90s notoriety to a lifetime of fortune. Maybe I expected him to be practicing for a comeback. What I found instead was that the most colorful competitor in American Gladiators history (pun intended) was just a regular guy that saw an opportunity and seized it. Confident that I was far enough away from the city lights that I wouldn’t be seen, I rolled the windows down on the Colorado, put on the goggles that Roundy gave me, and weighed the pros and cons of a mullet.

The next time you need a tow truck in Phoenix, or the next time you fire up some recreational marijuana (in the states where such a thing is legal, of course), or if you find yourself browsing the 24/7 American Gladiators channel on Pluto TV, you just might find yourself face to face with the legendary Purple Roundy.

Justin Broderway is an Atlanta-based drinker with a writing problem.