One Foundation To Inspire Them All: A Look at Isaac Asimov’s Foundation Saga 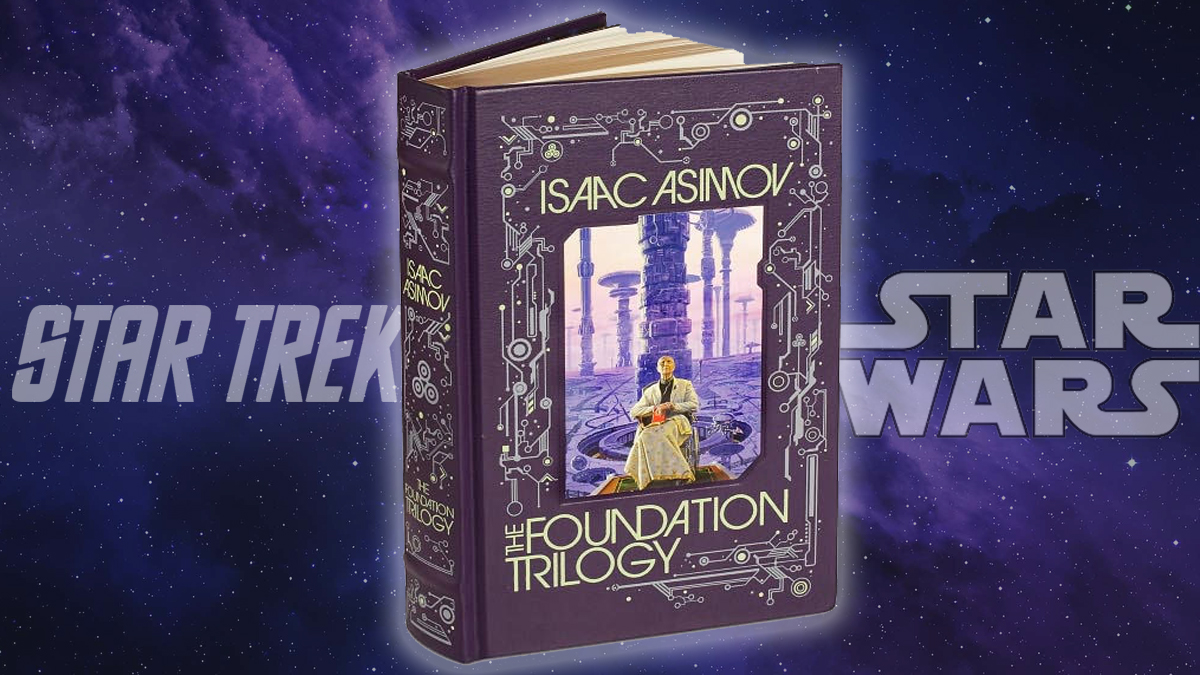 PART ONE: A LONG TIME AGO, IN A GALAXY NOT SO FAR AWAY…

Growing up, I was (and still am) a science-fiction movie fan. As a seven year old, I probably watched Return of the Jedi more than any other film during the 1980s. I still have my original Darth Vader carrying case with a handful of the action figures I grew up with, along with makeshift lightsabers made out of toothpicks. I even have fond memories of poring over the now non-canon (thanks a lot, Disney!) Star Wars novels of Timothy Zahn, Kevin J. Anderson, and Alan Dean Foster. I just couldn’t get enough.

These days, though—and primarily because George Lucas sold off the franchise to Disney—I’ve crossed over into the dark side and became a Trekkie. Not so much the original series or The Next Generation, but Deep Space Nine, Voyager, and even Enterprise.

But before you start wondering, no, this is not about Star Wars or Star Trek. This month, I’m diving deep into my obsession with a trilogy of novels that began in the 1950s which became a series of books stretching long into the 1980s, and eventually expanded into an entire multiverse (arguably the first multiverse). And it was this franchise’s original trilogy that served up some inspiration for Star Wars, Star Trek, and practically every other book, film, and sci-fi spectacular set within the final frontier in galaxies as far, far away as Acheron and Pandora, or as close as our own Milky Way.

I’m talking about none other than Isaac Asimov’s Foundation Trilogy.

As fans of these franchises that made us, we all probably know that the original Star Wars (A New Hope) is really Japanese film director Akira Kurasawa’s The Hidden Fortress with a little bit of his Seven Samurai mixed in. We probably know that Gene Roddenberry pooled together inspiration from the 1956 classic picture Forbidden Planet and contemporary space adventure serials like Flash Gordon and Tom Corbett, Space Cadet to create Star Trek. And although we rightfully credit George and Gene with creating these two titans of our childhoods, the little known truth is that the credit is somewhat misplaced. The real creator of Star Wars, Star Trek, Alien, and even Avatar—and just about any other movie that deals with stars—is none other than novelist Isaac Asimov.

Now I’m not taking away the credit from Ridley Scott, James Cameron, and all the many other talented scions of today’s sci-fi stories across every medium. It is rightfully deserved. But each of these creators had to have read Asimov’s Foundation novels and absorbed their futuristic insights during their own childhoods in order to have brought to light the respective worlds they would one day go on to imagine as pioneering and visionary creators. But by no means did George or Gene invent the concept of a hyperdrive (or warp drive); that is first mentioned as a means of space travel in 1951’s Foundation, though we get a more detailed explanation on how a hyperdrive actually works in the fourth Foundation novel, Foundation’s Edge, in 1982. (Though other authors like Arthur C. Clarke and Ben Bova have mentioned similar drives with varying names and origins in their stories.) And yes, the Millennium Falcon did make the Kessel run in less than 12 parsecs, though a parsec as a measure of spatial distance (not time—sorry, Han) dates back as far as 1913 and is heavily referenced (correctly, I might add) in Asimov’s novels; he was a scientist as well as a novelist, after all.

Thinking about the movies I grew up with, the books and comics I’ve paged through, and even the 8- and 16-bit video games I played as a kid, I’ve come to a strong realization after reading this particular trilogy that the foundation of the sci-fi media we grew up with and those we enjoy today are rooted in the Foundation novels. I see in my mind’s eye the iconic blue letters preluding “A long time ago in a galaxy far, far away…” and I now see parallels between the Galactic Empire of Cleon II and that of Emperor Palpatine; I see clearly that Captain Han Pritcher is Han Solo (perhaps even the name carried over as a homage?); and Asimov’s descriptions of the Empire’s last great general Bel Riose in 1952’s Foundation and Empire remind me of the frightfulness of seeing Darth Vader for the first time. Even the ability to manipulate “The Force” is referenced in Foundation and Empire and its 1953 follow-up, Second Foundation, and most formidably by Asimov’s great villain, The Mule.

Oh, believe me, I can go on ad infinitum. I could geek out about all these similarities and parallels, but to do so would mean spoiling a truly mesmerizing collection of novels that are not only exceptional stories, but brilliantly written with heart, humor, and a sort of Shakespearean wit, but without all the thee- and thou-ing about. So, if you’re interested in getting a deeper look into the world and workings of Star Wars, Star Trek, and stories even further beyond the stars than these, Asimov’s original trilogy (Foundation, Foundation and Empire, and Second Foundation) is undoubtedly the place to begin your journey to the center of all science-fiction.

But it doesn’t end there, my friends. As I myself have only recently discovered, the Foundation series is merely the microcosm of a much larger macrocosm. If you remember earlier in this post, I mentioned that Asimov may have created the first multiverse. Well, I’ll be back in thirty for the next installment of this special two-part Nostalgia’s Revenge! dispatch.