Having grown up during a solid chunk of the 1980s and all of the 1990s, I can say with confidence that the latter decade gave rise to some truly memorable, albeit kinda unusual things, and one of the more quirky of them has to be Pogs!

For those of you who may never have heard of these small circular discs made of cardboard, Pogs, also known as Milk Caps, was a game played by kids and teens throughout the 1990s. Basically, you stack your Pogs face down along with those of other kids. Then, you throw a slammer onto that pile, which scatters the Pogs about in a grand old mess. The ones that land face up were yours. Those that landed face down were restacked for the next player to take their turn whamming them with their own slammer.

Now, as far as actual gameplay goes, I dodged that part completely, and even the general collecting of them. At the time, the only slim bits of hard paper that I spent my time collecting were trading cards. The Pogs I did own I had stumbled on by accident or by the serendipity of family members buying them by the boatload because they were the latest craze, and, of course, Little Johnny had to be equally as crazy for them. Not so much. As a matter of fact, the only ones I remember holding onto for longer than a few days were the handful of “Spogz” I owned, which featured Spawn characters drawn by Todd McFarlane, and it was only because I was obsessed with Spawn shortly after Image Comics launched in 1992. 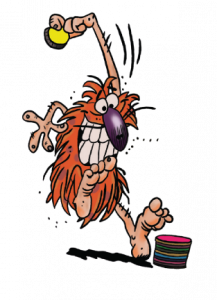 The next time I’d stumble on some Pogs wouldn’t be until 2018 when I started collecting various 4-inch Star Trek toys. During the mid-nineties, Playmates began packaging its signature “Space Caps” with Next Generation and Deep Space Nine action figures. But it would be a couple years later that I would once more encounter these intriguing little bits of cardboard. I was at an estate sale somewhere in Jersey rummaging through all the boxes and cobwebbed furniture drawers way up in the attic of this house (you find the best stuff in attics and basements), and it was there I discovered a modest treasure trove of Pogs, plastic containers, and slammers of varying materials and thicknesses. After missing out on a huge collection of them in an official Pogs binder at another estate sale a few months before, I didn’t hesitate. I tossed them into a box and paid for them. I couldn’t wait to get home and check out what these things were all about, as they seemed to be haunting me.

A few years prior to my rediscovery of Pogs, I worked on a campaign during my years as a crowdfunding guru for Indiegogo. It was a fundraiser for a mobile game that was officially licensed by the World POG Federation. The campaign itself was an utter failure despite some pretty cool features that would have been built into the app like the ability to snap pictures of your physical Pogs and add those to your collection of digital ones. I recognized some of the artwork on the Pogs I snatched up at the estate sale, and while I didn’t have any that featured the iconic Pogman, I did have some officially licensed Pogs on my hands, which I thought were much cooler than some of the more flashy ones I now had in my possession. Some of them even have a single staple in them, a nod to the humble origin of Pogs.

Because, apparently, Pogs date back to well before the 1990s. 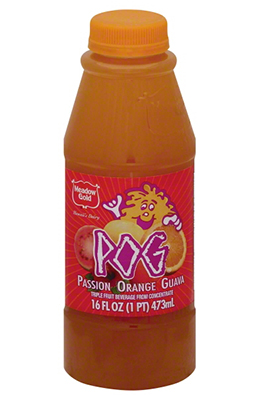 While doing some internet excavation to uncover more about Pogs, I dug up a really informative piece by Matthew Dekneef called “The Surprising History of Pogs, the ‘90s-Era Craze Sparked By a Juice Company” that demystified the origins of Pogs for me. According to Dekneef and his interview with Hawaii historian Burl Burlingame, who co-authored an entire book on Pogs, the craze started out as a way for a teacher to get her students to play a non-violent game at recess. It was based on a game her parents used to play back in the 1920s and ‘30s. She used the cardboard discs inside the caps of Passionfruit, Orange, and Guava juice bottles, for which Pogs gets its name. (An acronym for the three fruits in the juice.) Supposedly, staples were a direct homage to those original caps, though staples may also have been added by players to add a little extra weight to try and get a better flip during gameplay, and thus increasing the chances of landing face-up.

During the nineties, though, this simple game took the entire world by storm, and of course, what I really mean by that statement is that the whole world seemed to find ways to capitalize on the zeitgeist of the times––everything from Bill Clinton presidential campaign to the O.J. Simpson murder trail––and turn it into a Pog. At one point, it seemed that every company had its own set of Pogs. Every Coke product had a Pog; every star player in the NBA had their own Pog; cartoon characters would have their faces etched into slammers made from solid brass.

It was as though you weren’t anything unless you were a Pog.

From Spawn to Batman, Star Wars, X-Men and beyond, everything under the Sun appeared on Milk Caps and Pogs.

But despite how exploitative Pogs were, one thing that Pogs did that other toys and games of the time couldn’t was bring kids back to physical forms of gameplay during a time when they had foregone traditional toys and games for the graphics and digital action of video games. The early nineties was the apex of video game systems: the NES, SNES, and Sega Genesis brought kids outdoors from the parks into their living rooms and bedrooms, kept them (who am I kidding? kept us) staring into the screens of our television sets in a way that the Atari 2600 could never have done. What, if anything, could have pulled them from their homes to play with fellow kids but a game in which you could earn other Pogs, and in which your value was gauged by how many Pogs you owned, as well as your skill with a slammer to earn even more. In a way, this perhaps paved the road for trading card games like Magic: The Gathering and Pokémon and even international games played with small figurines like Gormiti in Italy.

Whether viewed as a momentary craze and product solely of its time or a lasting legacy of the power of exploitation, the lure and collectability of Pogs lingers on to this day. On eBay, collections can sell for substantial amounts of money. I was fortunate to find a sizable collection in an unassuming corner of someone’s attic, all but forgotten. And now, I’m on the hunt for even more Pogs, Spogz, Spacecaps and more, and who knows?––perhaps at some point, I’ll actually play the game, too, and discover the joy of whamming a slammer on a stack of Pogs, and earning even more Pogs to add to my collection. After all, it’s never too late to try something new, even if it’s old.

That’s all for this month––and this year! I want to give a big THANK YOU to all of you for reading this monthly(ish) column, and, of course, I’d like to thank Preston here at Retrofied Magazine for giving me a place to wax philosophic and occasionally poetic about Nostalgia’s Revenge. Next year, I’ll be back with a piece about one of my favorite book and CD artists. From metal albums like Sepultura’s Chaos A.D. and Meat Loaf’s Bat Out of Hell II: Back Into Hell to novels by the likes of Asimov, Lovecraft, and beyond, we celebrate the artwork of Michael Whelan. See you then, fans!