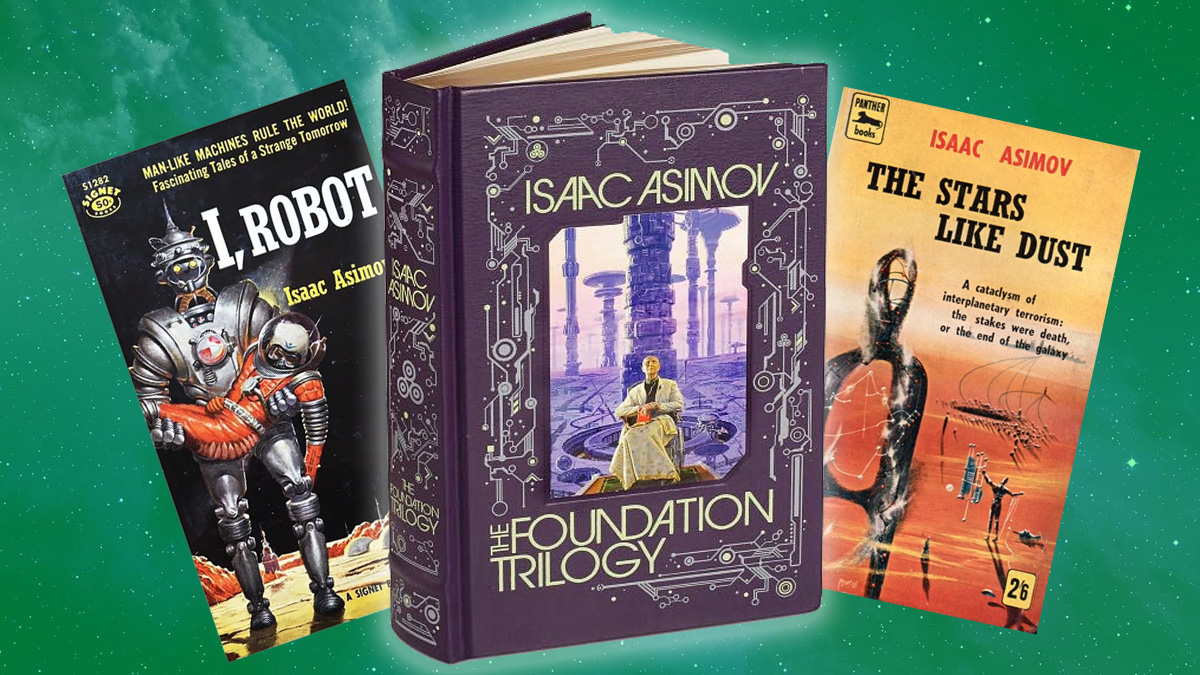 One Foundation To Inspire Them All: A Look at Isaac Asimov’s Foundation Saga

As I mentioned at the close of part one of my glimpse into what I now consider the greatest science-fiction saga of all time, the Foundation books are merely a microcosm of a much more grandiose world set into motion from the mind of Isaac Asimov.

Perhaps like many other fans of science-fiction and fantasy, I’ve somehow always been aware of Asimov and some of his stories, though my actual interactions with those stories themselves have been sparse at best—until only recently. My first experience with his work a few years back wasn’t even sci-fi, but his immense tome of literary criticism of the Bard himself, William Shakespeare. Then, I stumbled on a very slim spine’s worth of tales revolving around the worlds of tomorrow aptly titled Nine Tomorrows. Two stories in particular still stand out in my mind to this day: “All the Troubles of the World” and “The Last Question,” both of which deal with a computing machine called the Multivac. If you have a chance, I recommend starting here so as to get a small sense of the genius that Asimov encompasses as both a scientist and a writer.

It was primarily due to the Pandemic and being locked down for a healthy chunk of 2020 that I finally got around to reading the original Foundation trilogy: Foundation (1951), Foundation and Empire (1952), and Second Foundation (1953), and in fairly quick succession, too. Then, as I got deeper and deeper into the fourth book of the series, 1982’s Foundation’s Edge, I noticed a peculiar reference—and the first reference—to robots. I thought to myself, “no way is this guy gonna weave his Robot series into his Foundation series!” 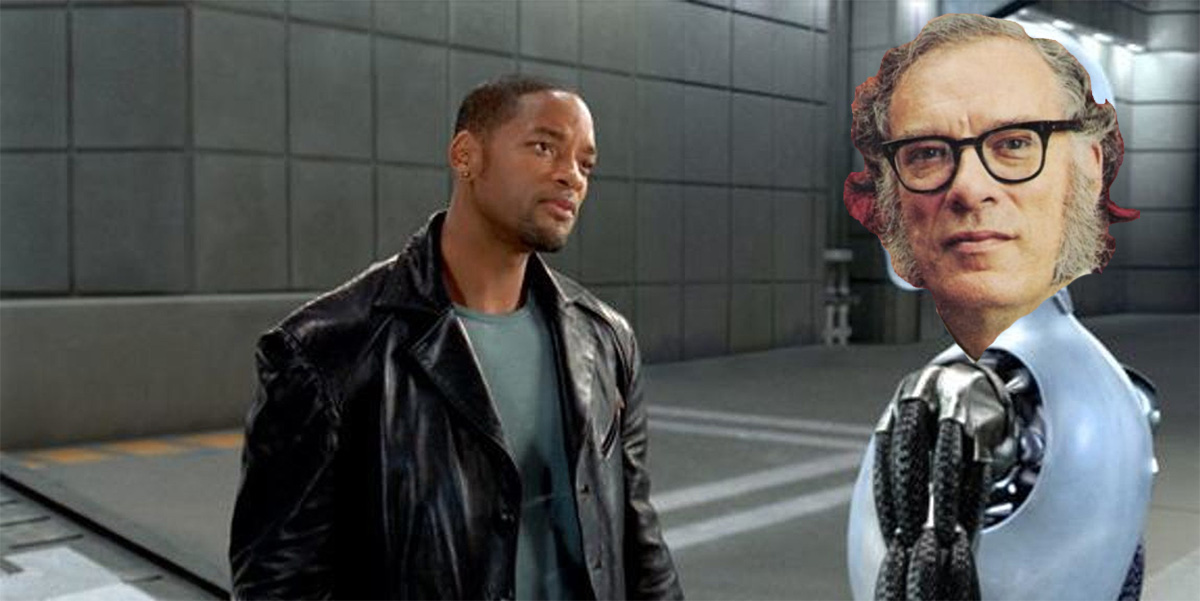 Now, if you’ve seen the 2004 movie I, Robot starring Will Smith, you probably know that Asimov authored a book of short robot stories bearing the same title (However, aside from his Three Laws of Robotics and a vague reference to a single recurring character in the stories, the movie has absolutely nothing to do with Asimov.). But I, Robot really serves as a foundation all its own to the author’s other books, which would eventually become his Robot series: The Caves of Steel (1954), The Naked Sun (1957), The Robots of Dawn (1983), and Robots and Empire (1985).

Now, it’s no wonder why it seems that these novels are somehow weaving themselves together into a single Asimovian Multiverse, seeing as he was writing each of these novels around the same time periods. And it’s not only the Foundation and Robot series that seem to be intersecting, but this grandmaster of literary science-fiction wrote a third series, parts of which I’m noticing are now working their way into the overarching story as I continue to make my way through all of these novels. (This is the lesser-known and not as well-received Galactic Empire trilogy: The Stars, Like Dust (1951), The Currents of Space (1952), and the first novel Asimov ever wrote, Pebble in the Sky (1950).)

While I’m not finished reading all of these novels just yet, I’m eight books in and showing no signs of slowing my pace or switching to another author. In short, I’m obsessed with the Foundation Saga, as I’ve begun to refer to it. With not only Asimov’s writing, which, though not as poetic as, say, Arthur C. Clarke’s way with words, keep me reading because of his sheer mastery of stringing you along the precipice of one chapter’s end, but also the scope of his imagination, which had to have been revolutionary at the time. Even something as simple as a bathroom sink that detects when you rub your hands together and dispenses soap directly into the water stream, then returns to a steady stream of clear water when your hands part, make me wonder why, so many years later, we haven’t invented something like this.

Every aspect of Wars and Trek, from force-shields to the concept of a galactic empire, comes directly from Asimov’s mind. Not only was he a science-fiction writer, but he was also a scientist, and much of what he wrote about, however theoretical in nature, is rooted in science fact. So yes, perhaps one day we will have our own personal clip-on body shields or we may one day use technology referenced in the Robot series to finally move past bulky rocket boosters and instead create the world’s first warp drive.

Only time will tell.

As lovers of movies like Star Wars and Alien and original series like Lost in Space, I think we owe it to ourselves to pay a visit to where it all began. And no, I don’t necessarily mean to watch Apple’s series, but dive into it old school––with our own imaginations. And if you do decide to take my advice, here’s the particular order in which I’m (going to be) reading the extended Foundation saga:

Then, once you (and I) are finished with these, you can dive into the prequels (Nope, George wasn’t the first one to do that, either!):

And then, after all of this, there’s Douglas Adams’ Hitchhiker’s Guide to the Galaxy, which I now see were directly inspired by Asimov’s books, but with a more comedic spin to them, and very British. I read these novels a long time ago, and now that I see the obvious origin of this series, I’m excited to give it another go.

Finally (I think), there are countless short stories and additional trilogies from both the Foundation and Robot series that were written by various other science-fiction masters and officially commissioned by the Isaac Asimov Estate. These novels include Foundation’s Fear (1997) by Gregory Benford, Foundation and Chaos (1998) by Greg Bear, and Foundation’s Triumph (1999) by David Brin, as well as a second Robot series by Roger MacBride Allen: Caliban (1993), Inferno (1994), and Utopia. (1996.)

Are any of these extended Foundation universe books any good? At this point, your guess is as good as mine. All I know is that from the first page of Foundation to the final page of The Robots of Dawn, I’m locked into this robust ‘Verse that Asimov’s birthed into existence through the science of psychohistory, and it’s given me a greater appreciation of classic and modern science-fiction media. (The ones that get it right, at least.)

Next month, we’ll hop into our time machine and move from The Nuclear Age to that most nostalgic of periods, the 1990s, in which we’ll dive into a truly strange phenomenon—POGs!

Until then, happy reading, fans!