Masters of the Originals: How MOTU Origins Gave Me the Power to Appreciate Their Predecessors 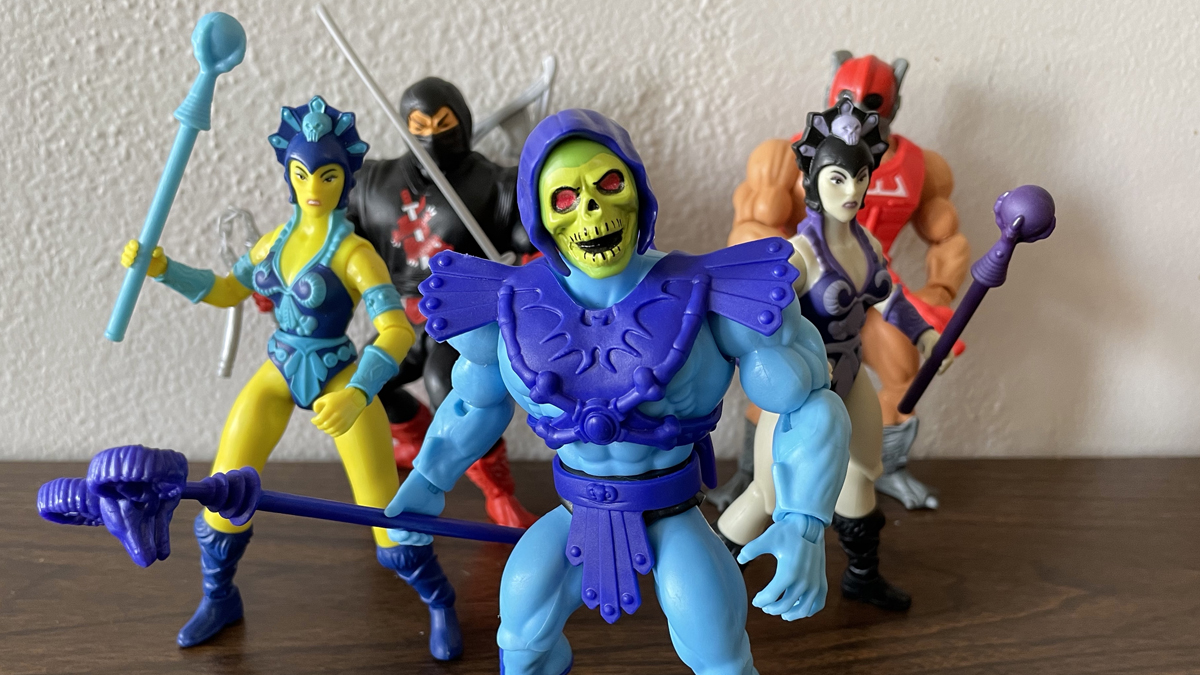 When I started re-collecting the toys and action figures of my youth, I had to keep the franchises I sought to a minimum due to financial constraints. What began with a thoroughly mapped out quest to find a handful of M.A.S.K. vehicles expanded into a foraging of a few Transformers and Real Ghostbusters figures, which then spread further out into a trek to find every figure in Playmates’ Star Trek: Deep Space Nine line to complement my newfound appreciation for the series as a semi-intellectual adult nearing my mid-forties.

For some reason, though, there was one franchise that I felt no desire to recollect despite being one of my favorite toy lines and TV shows as a boy: Masters of the Universe. Back in the day, I had legions of these 5.5 inch figures, countless vehicles, and both Castle Grayskull and Snake Mountain. My mom and dad jotted my initials in pencil at the bottom of each figure’s left foot so I’d know which figures were mine and which belonged to other kids at the playground, because everyone had these toys. Heck, I remember getting my Whiplash figure from my brother and sister-in-law; it was waiting for me at the end of the aisle when they got married. (Apparently, I had to be bribed with a new MOTU figure to be their ring bearer.)

Yeah, I was that infatuated with He-Man, Skeletor, and all their quirky fellow heroes and henchmen. But for some unknown reason, I just didn’t feel any need or desire to recollect any of the figures from the original line. I really didn’t even give much thought to Masters of the Universe at all. 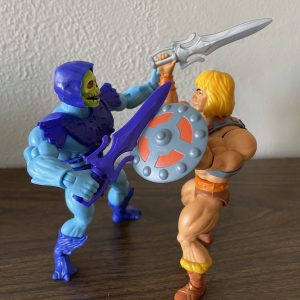 Then one day while I was catching up on a few of Pixel Dan’s Youtube videos, I watched his review of Mattel’s new Masters of the Universe Origins He-Man and Skeletor action figures. I was intrigued by these new versions of the old classics, with their more brightly-colored armor and weapons and 16 points of articulation. I also enjoyed He-Man’s new head sculpt. Sure, Mattel did away with the action features of the originals––that of the spring-loaded waist for powerful punching action––but the added articulation made these figures geared more toward collectors who would have more chance to pose them for display, and that’s exactly what I loved about them. Plus, at a $15 price point, these were more affordable than the MOTU Classics line, which is geared toward hardcore collectors, and I liked the sculpts better than the more Filmation-accurate Super 7 line that came out a few years prior to Origins.

When figures in the Origins line were first announced, they were a dreaded Walmart exclusive. I’ll spare you the long, ever devolving post-Toys “R” Us pain in the ass “collector’s market” bullsh*t that has been the bane of toy hunters’ existence for far too long now, but suffice it to say that scoring any of these action figures at your neighborhood Walmart was damn near impossible. I must’ve gone into literally two dozen Walmarts across my home state of New Jersey and even into New York, and I was met with empty shelves in the erroneously named “Toy Land” section. After about a six-month-long search, in the winter of 2020 I finally stumbled on my first Origins anything in the wild––Prince Adam’s Sky Sled, something I didn’t even really want, but I speed-walked it right up to the register because it wouldn’t be long before someone else would get it, and there was only one in stock. Soon after, I discovered a Battle Cat at the same Walmart in Kearny, NJ; a fellow collector and I had to coerce an unhelpful staff member to razor blade open a box of them sitting on a hand truck for what he must’ve considered two “men-children” bothering him on a Monday morning at 10 AM.

Unwilling to waste my gas on any further fruitless trips to various Walmarts, I decided to bite the bullet and download the Walmart app and play the equally as frustrating game of Eternian roulette, trying to snag a figure as soon as it appeared “in stock” and before it went “out of stock,” typically within just a few seconds. In fact, there were numerous times a figure would go out of stock while I was in the process of checking out! Despite this, though, I was able to nab most of Wave 1 that way, plus an early Orko from Wave 2, but unfortunately I had to pay an additional $5 in shipping for each figure. But I had them. I. Had. Them. 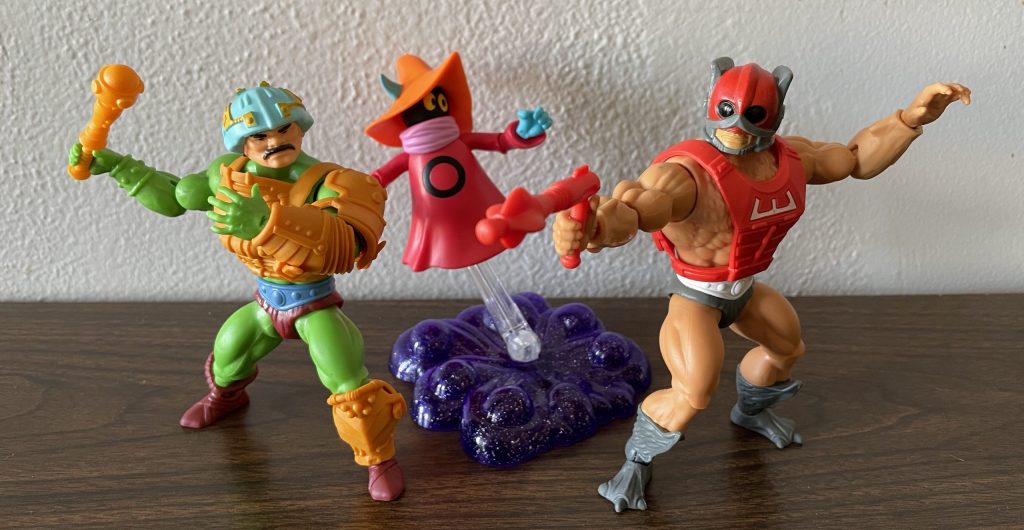 Weeks and months whizzed by, and I realized that I had somehow become a full-blown MOTU Origins collector. I waited with baited breath for Wave 2. I constantly checked the Masters of the Universe: Origins Fans Facebook page for updates from the community, seeing all the pictures of empty shelves on the East Coast while fans in Arizona, Texas, and too many other farflung states were already seeing Wave 3 figures hitting the shelves. And I was following Mattel for the latest info on forthcoming waves and even PowerCon exclusives. Apparently, I was all in on this modern day toy line.

Soon after amassing all of the figures I had my eye on, including Zodac––arguably the most mysterious character in the franchise––and a cartoon-colored variant of Evil-Lyn, I found myself (finally!) tiring of the hunt. It became far too challenging to find these veritable snarks even after Mattel severed its exclusivity deal with Walmart and the figures were now––in theory, at least––available at Target stores and online retailers like Big Bad Toy Store. And I was also pretty pissed whenever I’d see the same figures I couldn’t easily find hung up on pegs at toy shows and conventions at twice and sometimes three times the retail price. So I ceased the quest to find further MOTU Origins figures.

Then one Friday, I was digging around in the basement of an estate somewhere in Jersey, and aside from a G1 Optimus Prime (cab only, no fists) in good condition, I found myself a Cringer (Battle Cat sans armor, so… Cringer). The orange-striped big cat was intact; only a few blots of white paint stained his green body. I thought to myself man, this is so much nicer than the Origins Battle Cat I have at home. 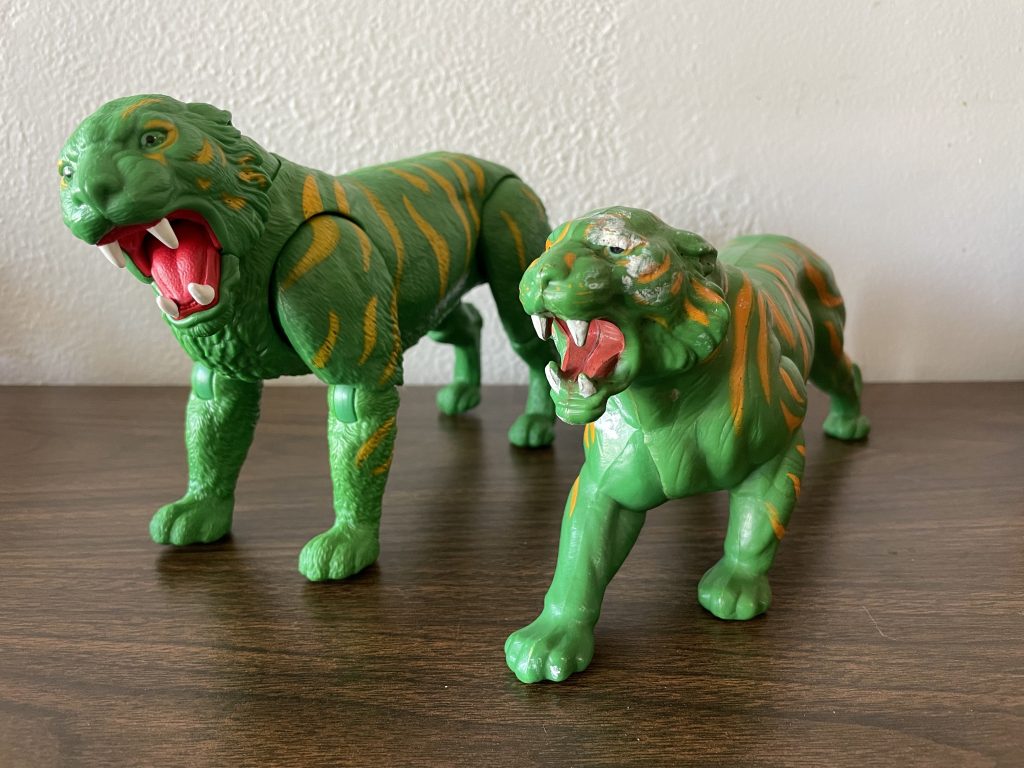 Fast forward a bit: while rummaging through a box of random ’80s and ’90s action figures at another estate sale, I snatched up some original MOTU figures, namely Jitsu, Tri-Klops, Grizzlor, a 90% complete Modulok, and a Faker complete with armor and sword, as well as a Ziploc’s worth of weapons and accessories. I stared at those colors, as muted as the decade in which those figures reigned supreme, the five points of articulation, that forever crouched posture, battle-action waist, and soft heads. Quite suddenly, I recognized what I should’ve realized all along: these figures are the G.O.A.T.––much more than their shiny new counterparts. No ankle or wrist joints. No endless customization options. No flaccid armor. Just epic heroes, fearsome villains, and our imagination. 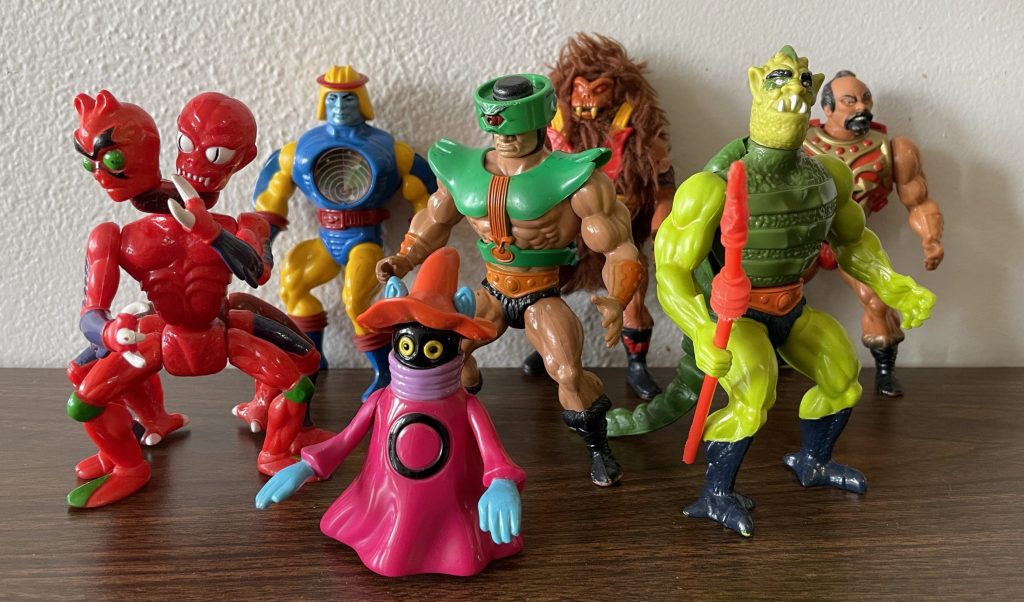 But hey, there’s no shade being cast on 2020’s retro-style MOTU line. It’s because of my brief love affair with Origins that I gained an all-new appreciation for the original Masters of the Universe figures, vehicles, and play sets I grew up with. Now, I’m looking to sell off my Origins figures in a single lot so that I have some spending money by the time ToyCon NJ comes back around, and it’s there I’ll be on the worthwhile hunt for more of these original heroes and villains with which to fill my toy vault with ‘80s Eternian excellence.

That’s all for this month, fans. As always, my deepest gratitude to you for reading. Next time in Nostalgia’s Revenge!, we’ll be soaring into the trenches of Star Wars and the canon that time (and Disney) forgot! See y’all in thirty (or so)!