Welcome to our first Nostalgia’s Revenge! post of 2022! This month, and in early preparation for a piece I’m writing for the “Batteries Not Included” issue of Retrofied Magazine, I’m delving back into a long-lost love of mine that I’ve only recently rediscovered due to dusting off my Cloak of the Dungeon Master and immersing myself in a world of wizards and warriors once more thanks to Dungeons & Dragons 5th Edition: science-fiction and fantasy artwork! In particular, we’re going to focus on the work of one Michael Whelan, whose name may not spark any eldritch blasts, but whose artwork most certainly will.

Now, the first time I ever came across Michael’s artwork was the cover of Meat Loaf’s Bat Out of Hell II: Back Into Hell album which came out way back in 1993. But it wasn’t just that Michael painted a truly gorgeous Hellscape for the album’s cover, featuring a zombie-like hero on a mechanical steed diving (driving?) towards a giant bat dwarfing the Chrysler Building on which it’s perched to save an angel from the unfurling wings of her captor; it’s that he also provided artwork throughout the entire CD booklet. In fact, a few years back on Twitter, Michael relayed a story about how Meat Loaf had seen a particular painting in his house and became singing lyrics to a song, and that gave the larger-than-life performer the idea to include more of Michael’s artwork for the album.

Even though I now know for which novels each of those images were originally painted, I still can’t listen to a single Meat Loaf song on that disc without seeing a flash of its corresponding image in the CD booklet. When I hear “Like is a Lemon (And I Want My Money Back),” I envision the cover of Piers Anthony’s On a Pale Horse; “Objects in the Rear View Mirror May Appear Closer Than They Are” conjures up the various covers for Del Rey’s collection of H.P. Lovecraft paperbacks; and I can’t see his “Dragon Prince” without hearing the Jim Steinman lyric “Never let a night like tonight go to waste” from the song “Lost Boys and Golden Girls” in my mind.

For those of you who may not be aware, Michael Whelan is one of the world’s most renowned book cover artists, with an unprecedented number of Hugo, World Fantasy, and Chesley awards for his 40-plus years to his credit. And in 2009, he became the first living artist to be inducted into the Science Fiction Hall of Fame. Despite these impressive laurels, all of which I had no idea about until I began doing some research for this piece, I had always considered Michael a lesser known and even underrated artist.

At a time when everyone could recognize the work of fantasy art luminaries like Jeff Easley, Larry Elmore, and Bruce Pennington, it felt as though much of Michael’s artwork, although prevalent in the books of major writers from Isaac Asimov to Joan D. Vinge, as well as album covers for Meat Loaf and Sepultura, was muted. In other words, you knew the art, but you didn’t necessarily know the artist who created it. If you grew up in the eighties and nineties like I did, you’ll probably recognize some of Michael’s more iconic artwork and signature style simply from browsing the spinner racks at the local Waldenbooks or B. Dalton Booksellers. Here are a few of my personal favorites:

Stormbringer by Michael Moorcock (Daw, 1977) – The final chapter in Moorcock’s original Elric Saga, named for the sentient sword that eternally curses our hero to a vampiric existence. The shades of green, the pulpy black of Elric’s cloak and Stormbringer perfectly captures Moorcock’s fantastical realm. 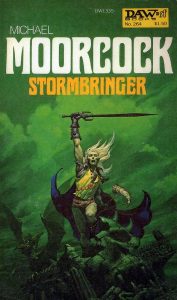 All My Sins Remembered by Joe Haldeman (Avon, 1978) – This cover beautifully and grotesquely encapsulates the proto-cyberpunk themes of the novel as it revolves around past sins and new identities, and the duality of the one who tries living with them all.

The Songs of Distant Earth by Arthur C. Clarke (1986) – This is a truly understated Clarke novel about exploration and intergalactic friendships forged on a world covered nearly one hundred percent by water––a world which is gorgeously depicted here. 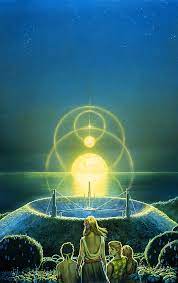 Killashandra by Anne McCaffrey (1985) – Here we have the titular heroine of McCaffrey’s second Crystal Singer novel, ever headed forward, but cautious of the past behind her with a man she once loved. (Yeah, it’s sci-fi mixed with romance, but at least the cover puts this strong female protagonist in full focus.) 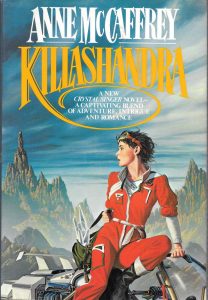 Dragon Prince by Melanie Rawn (Del Rey, 1988) – I’ll be honest, I’ve yet to get to this particular novel, but as a kid, I was always struck by the story of Rawn’s Dragon Prince novels, and this cover conveys it all: the prince and his Sunrunner bride standing confident amid a council of Wyrms on a world of desert and doom.

Grumbles from the Grave by Robert Heinlein (Del Rey, 1990) – The cover of this book published after the author’s death couldn’t be more apropos in both imagery and title. The interplay between the various shades of blue and orange is striking.

Fahrenheit 451 by Ray Bradbury (Suntup, 2020) – I foresee this cover for Bradbury’s dystopian tale about a world without books being destined to become as iconic and classic as the story itself.

If you enjoy this meager selection of Michael’s work, give him a follow on social media for daily posts of his art, sketches, and his process. On a final note, though, I will say that finding books brandishing Michael’s artwork are somewhat difficult to find, and when you do find them, they’re not cheap. (I’m still searching high and low for a copy of Second Foundation with Michael’s depiction of Arkady Darell on the cover for less than $15 plus shipping!) Perhaps it’s a testament to the artist and just how iconic his work has become over the years since they were first published on the covers of books that became just as archetypal of the science-fiction and fantasy genre.

Hopefully you’ve discovered (or like me, rediscovered) an amazing artist of imaginative realism. Until next month, treat your eyes to some pretty pictures, because next month we’ll be traveling to Eternia for a look at Masters of the Universe Origins versus originals. See you then, fans!