Blame It on the Beat: Music-Filled Movies with Sharp Social Commentary 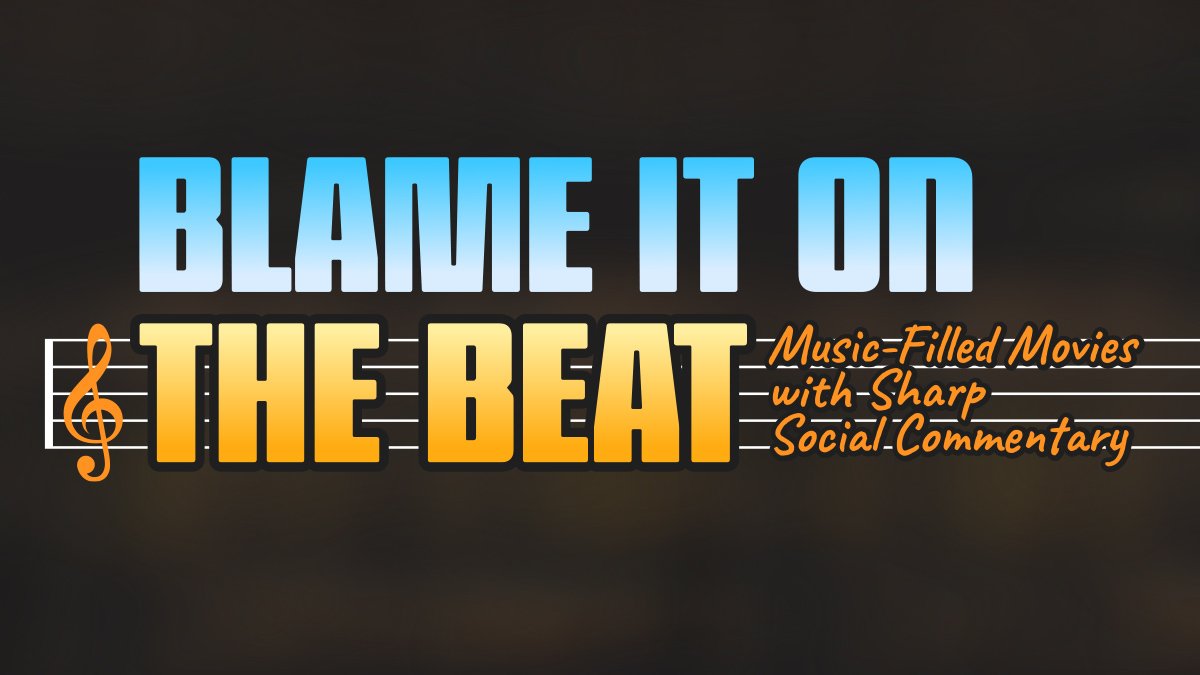 [Note: This article was originally published in our Spring 2021 “Pump Up the Jam” issue of Retrofied Magazine. Order your digital or print edition today!]

The stress of COVID-19 has me seeking solace in nostalgia-inducing films of my youth, and no movie soothes me more than Dirty Dancing—who doesn’t gleefully whoop when Jennifer Grey finally pulls off that lift at the finale? But on further reflection, it seems an odd choice for escapism, given that the need for an abortion—a botched, then-illegal one at that—pushes the romantic leads together. This is a movie that clearly conveys the horrors that ensue when women are deprived of the right to bodily autonomy. So why do I, along with so many others, find it such easy watching? I blame the music, and I mean that in the best possible way.

Set in 1963 at a Catskills resort catering to wealthy families, the film centers on the naively idealistic, aptly named Baby (Grey). When one of the resort’s dance instructors, Penny (Cynthia Rhodes), becomes pregnant, Baby gives her the money for an illicit abortion, then steps in to learn a dance routine that Penny and fellow instructor Johnny (Patrick Swayze) are meant to perform at another hotel, scheduled the same evening as the abortion. Administered by a fly-by-night abortionist “with a dirty knife and a folding table,” the procedure leaves Penny sobbing in agony, but she survives when Baby’s doctor father intervenes. Baby and Johnny fall for each other, but social class creates a yawning chasm between them.

Though the writing, acting, and direction are top-notch, it’s in large part the killer soundtrack that prevents the movie from being weighed down by heavy topics like reproductive rights and classism. A mix of Sixties and Eighties tunes set the mood, capturing the sensuality and longing of first love (the Ronettes’ “Be My Baby”), raw desire (the Contours’ “Do You Love Me?”), and unfettered joy (Bill Medley and Jennifer Warnes’s “[I’ve Had] the Time of My Life”). 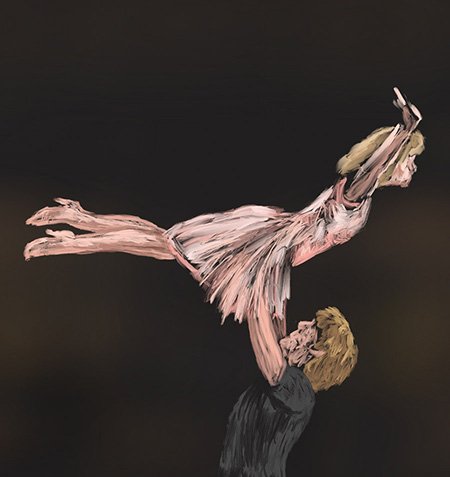 Moments like the montage depicting Baby’s evolution from watermelon-carrying wallflower to dancing queen (set to Eric Carmen’s “Hungry Eyes) keep me coming back. But every time I see Baby mastering another move, I also wonder what Penny must be feeling. At a recent virtual watch party, a friend and I spent just as much time talking about the importance of Roe v. Wade, which came just a decade after the events of the film, as we did about Baby and Johnny’s romance. And I found myself thinking that for the more privileged Baby, an unplanned pregnancy would have looked very different than it did for the working-class Penny.

How many nostalgia-fests leave viewers with this much food for thought?

Watching Dirty Dancing through a new lens made me consider my other favorite music movies, many of which fold in complex themes along with the sick beats…like Saturday Night Fever. If you’ve seen just a few clips from the movie, you’d be forgiven for thinking it’s essentially Grease with bell-bottoms. The basic plot—Bay Ridge disco god Tony Manero (John Travolta) tries to win both a dance competition and the heart of his dance partner Stephanie (Karen Lynn Gorney)—sounds laughably low-stakes. And the soundtrack, featuring songs that have become shorthand for the Seventies (Walter Murphy’s “A Fifth of Beethoven,” the Trammps’ “Disco Inferno”), adds to the campy flavor.

But the film is brooding, tinged with desperation; the intoxicating disco scenes are merely slivers of joy in an empty life. Working-class Italian American Tony’s existence consists of arguments with parents who don’t take him seriously, a dead-end hardware store job, and boorish buddies who bring out the worst in him. It’s only on the dance floor where he dominates, but despite obvious talent, he can’t translate his passion into the life he wants—or even envision what a different one might look like.

Though the catchy songs are a big part of why I love the movie, the music isn’t merely fun; it deftly captures that despair, like in one of the lyrics to the Bee Gees’ electrifying, infectious opening number, “Stayin’ Alive”: “Life going nowhere, somebody help me.” Even Yvonne Elliman’s seemingly upbeat “If I Can’t Have You” has a melancholy tone, reflecting Tony’s yearning for something, anything, else. 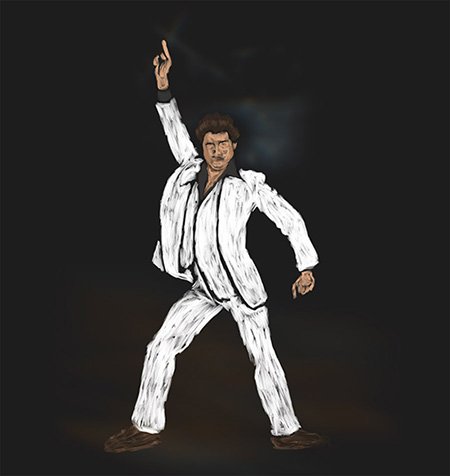 The film also leaves me pondering the privilege Tony does have. He’s horrified when he and Stephanie win the dance contest; he knows that the far more skilled Puerto Rican couple who received only jeers from the mostly Italian American crowd should have triumphed. But Tony isn’t innocent here, either; his victory is just an extension of the racism we see him and his friends exhibiting throughout the film. And despite the angst he endures, he’s just as capable of inflicting it—he assaults Stephanie and does nothing while his friends gang-rape his former dance partner and friend Annette (Donna Pescow).

Recent think pieces have expressed shock and disgust at these scenes, which may seem out of place to those brought up to view the movie as a Seventies-set High School Musical. But to me the movie is a messy, turbulent portrait of a racist, misogynist protagonist, one with some self-awareness but perhaps not enough to change the trajectory of his life. Unlike with Dirty Dancing, however, viewers might be tempted to initially dismiss Saturday Night Fever because of its trendy music, but both films use music to powerful effect, pushing audiences to grapple with complex narratives.

Finally, no nostalgic music movie fest would be complete without Empire Records (as a Nineties kid, I’ve got to rep my own decade), a film set over 24 hours at an indie record store on the verge of being sold to a soulless chain. The music comes fast and furious, with lightning-fast switches from GWAR to Dire Straits to the Cranberries to the Gin Blossoms. As the store’s teen workers try to save it, they also deal with their own problems: type-A, Harvard-bound Corey (Liv Tyler) is addicted to speed; Deb (Robin Tunney) copes with depression; Gina (Renée Zellweger) clashes with Corey and secretly longs to become a singer; and art student A.J. (Johnny Whitworth) seeks the perfect way to reveal his romantic feelings for Corey.

The movie feels as crammed with music choices as it is with issues, but somehow it escapes feeling after-school special–ish—no mean feat given the era. Many of the problems aren’t solved by story’s end; it somehow seems enough that, for example, Deb can even say aloud that she tried to kill herself. As a kid several years younger than the characters, all of whom seemed impossibly hip, I was fascinated and a little reassured: You could have problems, serious, not easily resolved ones, and just keep going.

True, the mark of a successful music or dance movie is whether it gets viewers singing along or on their feet moving. But the really great ones go a little farther and get us thinking. As Eddie and Mark say in Empire Records, maybe music truly is the glue that holds the world together.

Mahnaz Dar is an editor at Library Journal and School Library Journal. You can find her on social media @DibblyFresh, where she shares adorable animal videos and tweets about children’s literature, The Sopranos, and her favorite Nineties TV shows.