An Ode to the Family Station Wagon 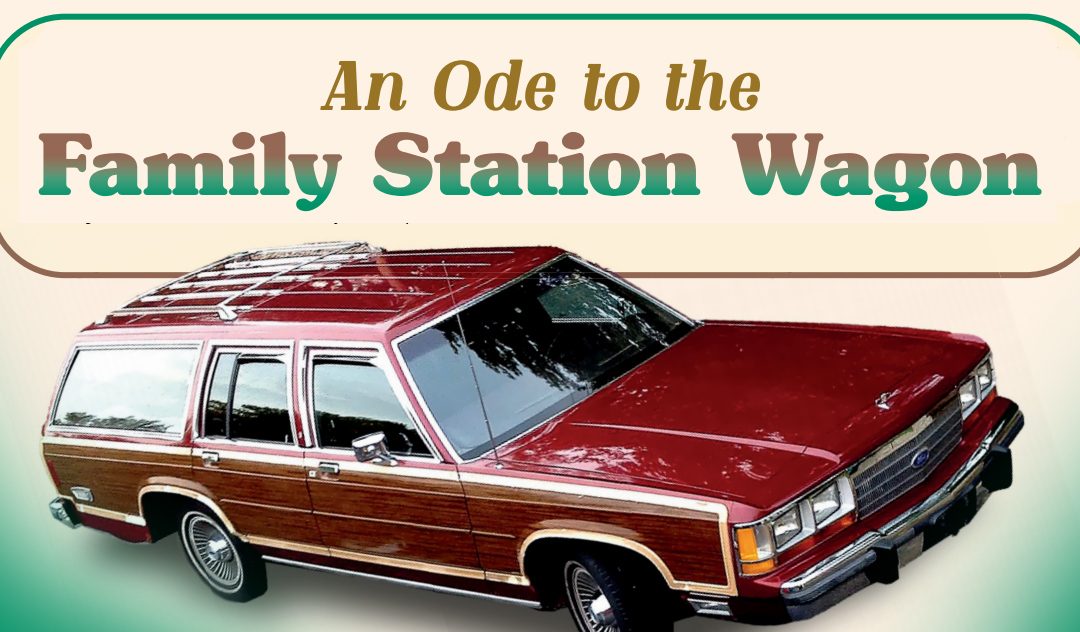 Note: This article appears in Retrofied Magazine’s summer 2021 “Road Trip” issue. Click here to order your own digital or print edition for a trip down memory lane.

Before SUVs were ubiquitous, before the minivan takeover of the ’90s, there was the station wagon. Whether you were lucky enough to grow up in a family with this vehicle as your daily driver or if you simply experienced its majesty as a guest, those of us who were lucky enough to have ridden in one know the allure it still holds. Simultaneously beauty and the beast, the station wagons of our youth rumbled their way into our hearts and slammed their gear shifter into park.

There were many types of station wagons, across many decades, but you know exactly the ones I’m talking about. Why anyone thought faux wood paneling on a car would look good is beyond me, but as the ’70s and ’80s demanded that everything be covered in brown wood paneling, that’s what we got. And we loved it. With wood paneling adorning the walls of most homes, the family station wagon called to us as a home away from home. Who could resist its siren calls?

As big as a boat, as heavy as a tank, and reminiscent of a coffin-toting hearse, there was no greater status symbol signaling to the world “I am a middle-class suburbanite!” Whether you drove a Plymouth Reliant, a Buick Roadmaster, Chevy Caprice Classic, or a Ford Country Squire, moms and dads up and down the carpool line knew you were bringin’ the heat. With velour upholstery, lush carpeted floors, and ashtrays for days, you knew your car wasn’t just made for comfort and convenience, but also…capacity!

With row after row of fold down seats, what couldn’t these bad boys carry? Not much. Most often, however, the cargo was kids. Kids everywhere. So many kids your parents wouldn’t know if they accidentally left you inside the grocery store. How could they? Half the time the kids were facing away from them, tormenting other drivers from the rear-facing pull-out third or fourth-row bench seat. Forget riding shotgun! Give us a view where we could make silly faces and taunt other drivers down the highway, laughing about it all the way…until the awkward realization that we were forced to stare down our victims with no means of escape. But we sat in that shame, with rarely a functioning seat belt across our laps, because that made us stronger, sturdier, and resolute…just like the wood-paneled rear-wheel drive beast transporting us down life’s highways.

When Clark Griswold reluctantly accepted the Wagon Queen Family Truckster station wagon in avocado green at the beginning of National Lampoon’s Vacation, the vehicle was lampooning the ever-larger, ever-uglier cars of the 1970s. But looking back, those cars were exactly what we needed, when we needed them. America in excess. Just as those wagons of our youth played into the nostalgia of the original “Woodies” of the ’30s and ’40s, there’s a small chance we see a resurgence of popularity for the family station wagon, but even if we don’t—we were there. We remember. This iconic family vehicle may no longer be regularly spotted cruising down the road, but it’s memory will keep on truckin.’

Preston is the Editor-in-Chief of Retrofied Magazine. His words have previously appeared in Paste, SyFy Wire, Gameroom Magazine, GeekDad, and RETRO Video Game Magazine, among others. He is the co-host of the Wayback Attack Podcast and co-founder and organizer of the Southern-Fried Gaming Expo. He resides outside of Atlanta, GA.