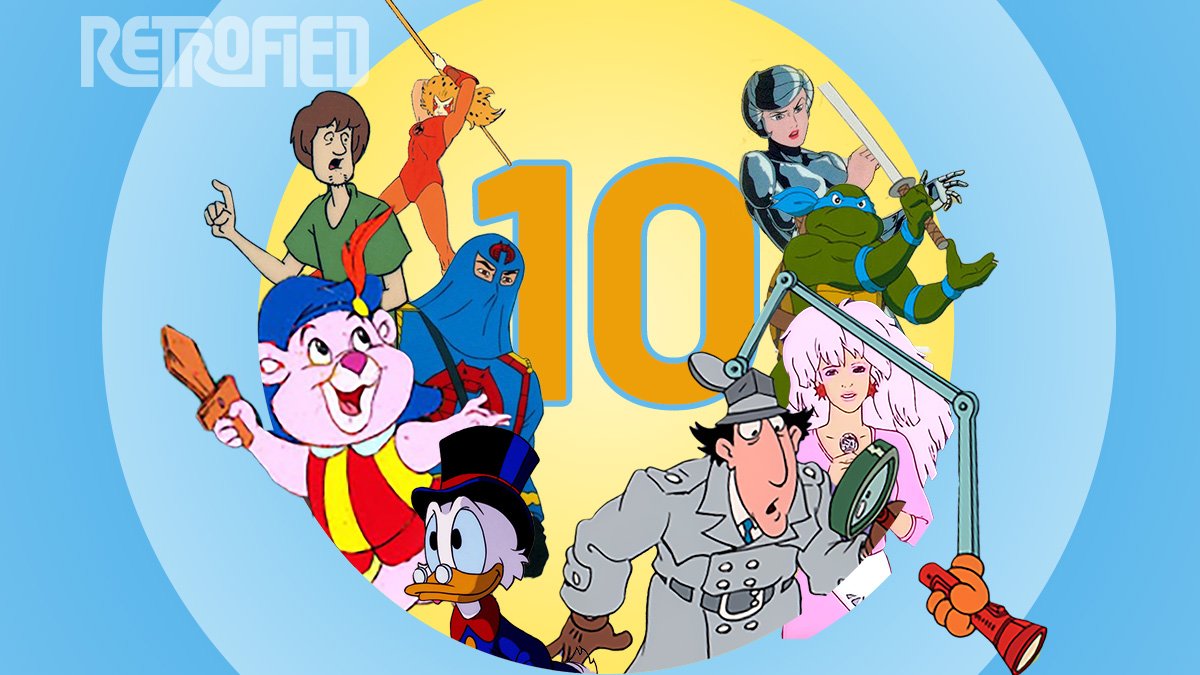 [Note: This article was originally published in our Spring 2021 “Pump Up the Jam” issue of Retrofied Magazine. Check out a free preview or order a digital or print edition today!]

We spent our formative years plopped in front of the TV on Saturday mornings or munching on afterschool snacks, attention rapt, while they played. They might have only been 90 seconds or less, but they wormed their way into our memories until they might be all we remember of a show.

In our current age of streaming shows with skippable intros, theme songs have largely fallen by the wayside. But back in the ’80s, when we had no choice but to sit and listen dutifully, theme songs did three things: they told the basic story of the show, they were catchy, and they incorporated the catch phrase and/or name of the show as much as possible.

For this classic ranking I stuck to ’80s staples, with one notable exception—partially because the era that invented Saturday-morning cartoons delivered some of the most iconic cartoon theme songs of all time. Also because the few late-’70s cartoon theme songs that are still kicking around in my brain are also pretty problematic (I’m looking at you Hong Kong Phooey).

So grab your bowl of Cap’n Crunch, put some fresh batteries in the remote, and let’s take a listen.

Squeezing in at the end of the 80s, the original X-Men cartoon actually had a deeply catchy tune. It’s one of those theme songs that you find yourself humming, despite the fact that it doesn’t have any lyrics. But maybe it should? Make sure you check out the “original lyrics” version by Ryan North.

Am I the only person that remembers this show? I asked my wife and she looked at me like I was crazy. My brother, who I was certain would remember, did the same. It’s probably for the best. This forgotten Disney Afternoon cartoon about a band of multicolored (decidedly non-gummi) bears defending a medieval forest had a wicked hook: “Gummi BEARS! Bouncing here and there and everywhere!” It’s lived in my head for decades, bubbling up every few years with its catchy beat. I literally remember nothing else about the show. Chances are, once you hear the tune, you’ll fall prey to its curse as well. With that kind of staying power, it earned its place on the list.

Chances are, you’re already humming the iconic “Doo-doo-doo-de-doo, In-SPEC-tor GADG-et, doo-doo-doo-de-doo. HOO HOO!” If you’re not, then you missed out on one of the most annoyingly persistent theme songs of all time. After hearing the title of the show about half a dozen times, the only other words in the song are his catch phrase (slightly remixed) “Go, Gadget, Go!” Some might see it as obnoxious and simplistic. I, however, applaud the put-upon composer for their minimalism, boiling the cartoon theme song down to its essence

Forget Scooby Doo and Scrappy Too and all the other remixes. For me, the only cartoon theme song worth its weight in Scooby Snacks was the OG Scooby Doo Where Are You? Yes, this does violate my ’80s rule but Scoobs was in such heavy rotation on afternoon cartoons that the easy ’70s beat was unavoidable. The theme to Scooby Doo tries its damndest to be an actual song while still hewing to temporal and thematic restraints. Yes, it’s old-fashioned, even for the ’80s when a lot of us first encountered it but it’s undeniably classic.

7. Jem and the Holograms

Much as the previous entry was a product of its decade, Jem and the Holograms was quintessential ’80s pop at its bubblegum pink perfection. I give Jem a lot of credit for serving up a theme song that feels like it could actually have been the introduction song by the band itself. In fact, if you take a meta approach and view the theme song as marketing for the band rather than for the show about them, it’s fairly genius. Some might even say “truly outrageous.”

Here we go, the first of the big duo of ’80s Hasbro properties to crack the chart. The G.I. Joe theme song was instantly recognizable. From the opening blast from the brass section, it settles into a reassuring, metronomic march. The G.I. Joe theme isn’t there to impress or show off. It has a job to do, and that job is to defeat any questions you might have about the show. For as well known as it is, it’s also impressively bland, keeping it out of the top 5.

As far as recognizable themes go, there aren’t many that can beat Transformers. That said, taken on its own, it’s a bit of a dud. While the robotic vocal filter was unique (and very, very ’80s), the theme song doesn’t do much beyond saying “Transformers,” “Robots in Disguise,” and “More Than Meets the Eye” over and over with a spare single line of exposition: “Autobots wage their battle to destroy the evil forces of the Decepticons.” It’s almost Inspector Gadget-esque in its simplicity, save for the more rousing, epic tone of the music.

That said, Lion did a bangin metal version of the original theme song for Transformers: The Movie that rocketed us back into our seats. If we’d gotten this version every afternoon, our young heads might have exploded. If this version didn’t exist, no way it beats G.I. Joe.

If there’s one thing that Rankin/Bass knew how to do (other than make cartoons about animal/human hybrids), it was to create an earworm of a theme song. The Thundercats theme song gave us a slow build, promising action: “Thundercats are on the move. Thundercats are loose!” Which built to the chorus of “Thunder. Thunder. ThunderCATS!” Just like Lion-O’s activation of the Sword of Omens. And don’t sleep on the rolicking piano melody that picked up once the song found its rhythm. It got you pumped to watch an anthropomorphic lion-man beat up a mummy

If you haven’t sung “Teenage Mutant Ninja Turtles” three times to yourself by the time you’ve finished reading this sentence, you might just be in the wrong place. TMNT was the iconic theme song of the mid-to-late ’80s. We sang it on the playground. We hummed it while we crashed our Ninja Turtle action figures into each other. We never deviated from the order and descriptions of the turtles in the song when explaining, exasperatedly, to clueless parents exactly what the difference was between the four turtle brothers. Musically, it’s crushingly simple but that’s what also gave it its staying power. Cowabunga.

Silverhawks might not have quite the name recognition of their furry Rankin/Bass counterparts, but their theme song quite literally screams. With a metallic screech, you’re rocketed into a rousing cassette rock-era theme with some actual musical chops. There’s even a legit electric guitar solo played by one of the characters in the middle. All the while spaceships and metal-clad warriors are flying through space, metallic squids writhe, and giant mecha villains transform by bursting through their skin into their larger forms. The entire spectacle was guaranteed to instantly root into place any kid that experienced it.

This is one of my favorite cartoon theme songs of all time. That plucky bass line hits and I’m already bopping back and forth, ready to head off on adventures with Huey, Lewy, Dewy, and Uncle Scrooge. I love the build of this one. Unlike other theme songs that blast the name of the show at you, the DuckTales theme eases you in, setting up the premise of the show before dropping you into a triumphant chorus of “Duck Tales! (woo hoo)” By the way, that “woo hoo” is required. Any mention of DuckTales without the woo hoo is invalid. It’s fun, energetic, and will have you humming the tune all day.

Anthony Karcz is a pop culture, sci-fi, and fantasy junkie with an affinity for 80s cartoons. When he isn’t dispensing (mostly sound) technological advice on the Forbes.com Innovation page, you can find Anthony on Roarbots. His first novel, Nightingale, can be found on Amazon.